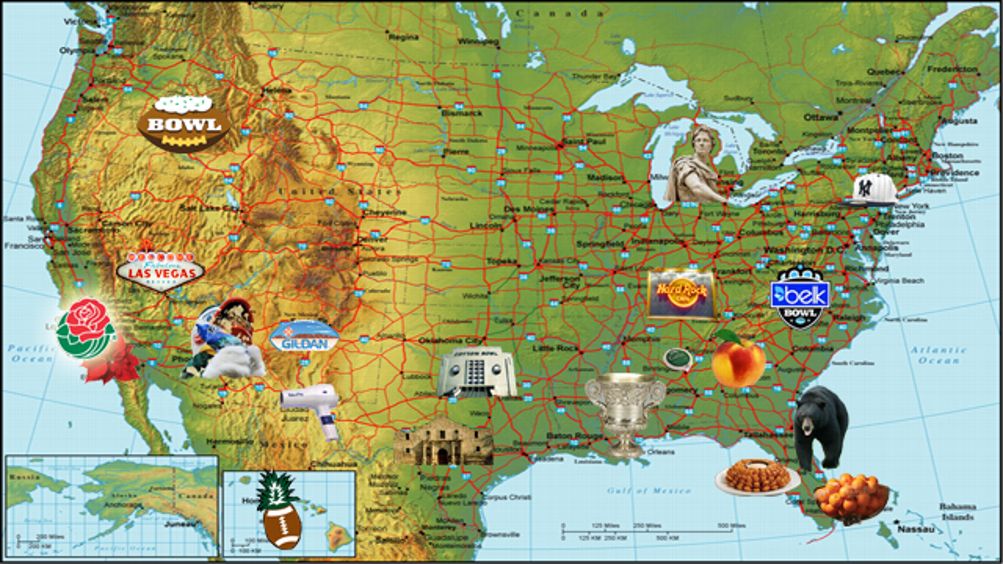 Remember the August argument about appreciating the crummy early-season slate, not so much because it was compelling football as because it was (a) football, and (b) watchable live football? Counting down the number of remaining college football contests is about to get depressingly easy, and there’ll be plenty of reasons to feel sorry if you bail now. If you’d skipped last year’s bowl kickoff, here’s what you would’ve missed: 1,237 yards of offense, 320 rushing yards from Nevada’s quarterback and first-string running back alone, two touchdown passes in the game’s final minute, and a roadrunner in a pear tree.

The first four games that ring in the postseason are colorfully organized, and we celebrate them ad nauseam for reasons like logo garnishes, but don’t let our giddiness over coaches’ visible discomfort at being photographed with showgirls distract too much from the on-field story lines. Tulane and Washington State, back in the postseason! Khalil Mack’s final game as a Bull and Derek Carr’s final game as a Bulldog! Love! Valor! Chives!1 Join us, won’t you? 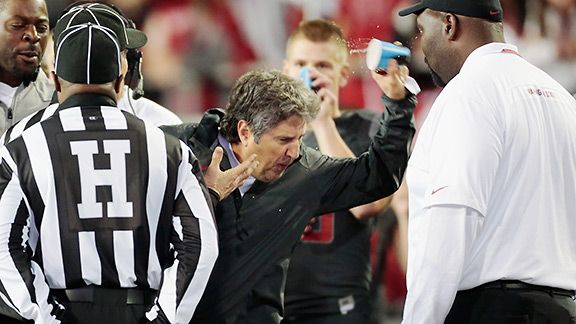 Colorado State is coming off a five-year postseason drought, having last played in the 2008 New Mexico Bowl, wherein the Rams staged a three-touchdown fourth-quarter something-or-other that we can’t exactly call a comeback to pull out a win over Fresno State. (What do you call it when a team goes from eight points down to 12 points up in eight minutes? We should probably call it something else.)

The wait for Wazzu, the first of nine Pac-12 teams to accept bowl invitations, has been twice as long; the Cougars’ last foray into the postseason was a rip-roaring upset of Texas in the 2003 Holiday Bowl. Remember, too, that Washington State playing in a bowl game means Mike Leach dropping quotes at will:

“Throughout my career I have played in New Mexico a lot of times, I’ve visited New Mexico, I’ve skied in New Mexico, and it’s a great place,” Leach said after the bowl pairings were announced. “There is a great spirit to the people there and we are honored to have the opportunity to go to Albuquerque to play another football game.”

Viewers still salivating from last season’s pointsplosion and tuning in now expecting more of the same are in for a treat: CSU is the only FBS team to produce both a 3,000-yard passer and a 1,500-yard rusher this season in Garrett Grayson and Kapri Bibbs. Grayson has already set the program’s single-season passing yardage record; Bibbs, just a sophomore, will break the Rams’ single-season rushing record 30 yards from now. Wazzu’s offense, led by quarterback Connor Halliday, already owns the Pac-12 record for completions in a season. Keep another eye on Marcus Mason, and impress your viewing party pals with the knowledge that Leach does employ a running back!

Chasing these offenses: Rams linebacker Shaquil Barrett, who was just named Mountain West Defensive Player of the Year and has recorded 20.5 tackles for loss and 12 sacks so far this season, and Cougs cornerback Deone Bucannon, a Thorpe Award semifinalist who currently leads the Pac-12 in tackles. And just to keep the scoreboard sparking: Jared Roberts (CSU) and Andrew Furney (WSU) are the most and second-most accurate kickers in their respective programs’ histories. 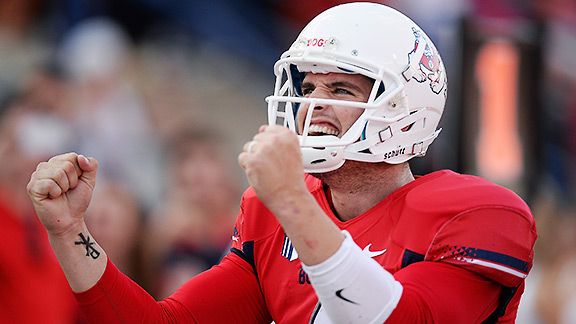 The last time these two teams met, in the Coliseum in 2005, the Bulldogs put quite the scare into the Trojans, an undefeated squad some of you might remember hearing about. In 2013, Fresno was the team chasing a BCS bid, with the Bulldogs getting to 10-0 before finally falling in a raucous shootout at San Jose State over Thanksgiving weekend. Fresno did go on to defeat Utah State in the inaugural Mountain West championship game, but such are the stakes in the non-AQ leagues: That one loss yanked the Bulldogs from a spot in the last weekend of the postseason to opening-act duties on the very first day of bowl play.

You likely already know USC’s story: The Trojans fired their coach before the end of September, at the airport, with what was technically still a winning record. They elevated defensive line coach and noted Hummer enthusiast Ed Orgeron to interim head coach and finished out the season with a 6-2 record under his growly leadership. They passed over Coach O for Steve Sarkisian. Now, they’ll play in Las Vegas under interim interim head coach Clay Helton, formerly the Trojans’ offensive coordinator.

Clay Helton and his dates. pic.twitter.com/9PbEyi5AXp

The most famous unit on this field is that Fresno offense, the centerpiece of one of the most entertaining games we saw all season and the control center for Carr, who began fall camp at his wits’ end with worry over his newborn son, and heads into the postseason with 11 wins and close to 5,000 passing yards to his name. Carr is averaging around 400 aerial yards and four touchdowns per game, has thrown 23 of this season’s 48 touchdown passes to sophomore receiving phenom Davante Adams — and is about meet the rudest on-field challenge of 2013. Fresno’s ballistic passing offense versus USC’s belligerent passing defense is the most compelling unit matchup of this first bowl weekend.

A Vegas victory would push the Trojans to 10 wins despite having lost their head coach twice within the span of a single season; a Bulldogs win would hand Fresno the first 12-win campaign in program history. And apart from that promise, both programs have recent postseason memories they’d like to replace. A fractious Trojans team lost last year’s Sun Bowl to a 6-7 Georgia Tech outfit, while Fresno was handily blown out in Honolulu. Adams had 144 yards in that game, but you’d never guess it from his post-practice remarks on Wednesday:

“We need to get this victory,” Adams said. “Last year we left with an L; this time we can’t do that. We had fun in Hawaii and didn’t do well in the game, so this time we may have to limit the fun.”

If he’s trying to get out of having to sit through Criss Angel, well, that’s a sage argument emblematic of wisdom beyond his years. 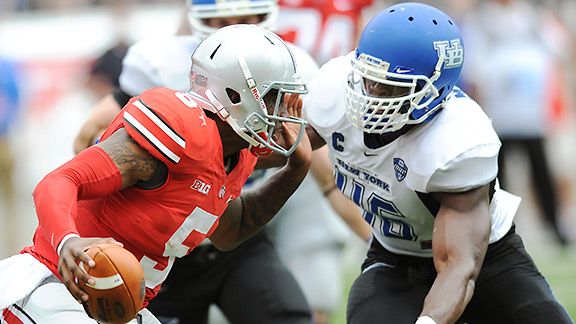 Look, we’re not about to preview the Potato Bowl without talking some more about the Idaho Potato Commission’s website, which, despite the less-than-lofty position the game itself occupies, is among the postseason sponsors’ very most elite Internet operations. There is the kids’ corner, featuring “Coloring With Spuddy” and the “Bouncin’ Taters Game.” There is the Dr. Potato blog, gently scolding consumers for wrapping baking potatoes in foil and asking whether a stressful economy causes increases in potato consumption. And then there is the tailgating recipes page, which has found innumerable, occasionally diabolical ways to insert the noble potato and potato-based products into your game-day experience. We will now power-rank our favorite Idaho Potato Commission tailgating recipes for you. Just try to stop us:

1. Heart-Healthy Drop Kick Idaho Potato Dip. GAME CHANGER: It’s the dip ITSELF that contains potato substance, and potatoes of any kind are NOT called upon as dip-retrieval mechanisms.

3. Idaho Potato Bruschetta With Tomatoes and Olives. Somewhat surprisingly, there is bread in this.

IN CONCLUSION, we are and shall ever remain in rapt, unironic awe of the marketing forces behind the Famous Idaho Potato Bowl, beginning with the pillowy clouds of sour cream and flecks of chive that grace the game’s official logo and certainly not ending with this website. Why every bowl game doesn’t devote itself to serving its audience with this level of detail is one of the enduring mysteries of the sport, and we will never, ever shut up about it, world without end, amen.

To football! It’s the first meeting between the Bulls and Aztecs, both programs that could benefit from exposure to the steady, unswerving nature of the potato after seasons spent half on the fainting couch. Buffalo began the season with back-to-back road dates against future BCS invitees Ohio State and Baylor, required five overtimes to beat Stony Brook in Week 3, and got Paul Pasqualoni fired all before the end of September. San Diego State (deeeeeep breath) opened the season with a bad, bad loss to Eastern Illinois, served as Ohio State’s second punching pillow, nearly but did not beat Oregon State, beat New Mexico State by 10, beat Nevada in overtime, beat Air Force by seven, took Fresno State to overtime, beat Regular New Mexico by five and San Jose State by four, won consecutive overtime games at Hawaii and against Boise, and lost 45-19 to UNLV in the regular-season finale. We are currently harboring a vague terror of the Aztecs similar to our fear of disembodied eyeballs: They probably cannot hurt us, but what if they have powers?

The party in this game who can definitely do lots of hurting and probably also has powers of some kind: Buffalo linebacker Khalil Mack, who’s currently projected to go in the top five of the 2014 NFL draft for reasons elucidated below:

This is Buffalo’s second trip to a bowl game in school history;3 a win here would mark the Bulls’ first bowl victory. The Aztecs hold the early edge in bowl week activities following a 241-216 win over the Bulls in charity bowling.

BACK TO THE MATTER OF THE KING OF STARCHES FOR ONE IMPORTANT FINAL POTATO FACT: A senior athletic department official at a Potato Bowl–playing school once told us the team had been served 12 kinds of potato-based dishes over the course of a single bowl week. The Potato Bowl is the greatest. Thank you for your attention to this matter. 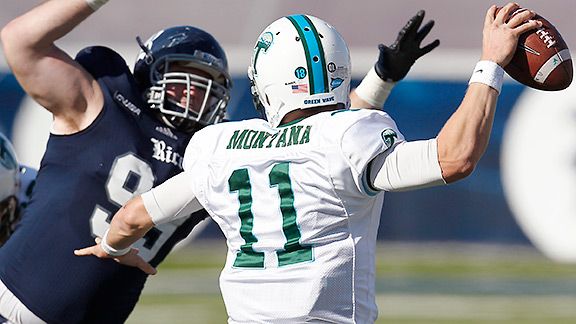 So Tulane finally makes it back to a bowl game, and it’s in the stadium the Green Wave thought they’d bid farewell to for good? What’s with circumstances repeatedly steering Tulane back to the Superdome? Is it OK to be thrilled that Tulane is essentially playing another home game for its bowl date, by way of being thrilled that Tulane is back in the postseason at all?

Because that’s where we are. The Green Wave’s last bowl appearance came in 2002; the last one before that was in 1998, and the last one before that in 1987. We’re just happy to see these guys again — along with special guest Devon Walker — wherever the venue. And with the Ragin’ Cajuns piling in from Lafayette, New Orleans is far and away the best choice for a bowl destination this weekend, simply in terms of potential tailgating fare.

Despite Tulane’s hefty lead in the all-time series, it’s fair to call this a grudge match: The Cajuns thumped the Green Wave midway through last season, 41-13. Key story lines to follow this Saturday include the health of both teams’ starting quarterbacks. Nick Montana will likely return as Tulane’s starter, per his coaches; the prognosis for Louisiana’s Terrance Broadway is less certain. But we implore you, because we love you: It’s a Saturday-night game in front of an in-state crowd. Go kick back, suck on a crawfish head, and give thanks for the delicious juices contained therein, and for football, and for whatever else you’ve been grateful for this season.

We’ll close today with the press conference quote of the week, from Tulane head coach Curtis Johnson: “I would really like to thank God for divinely straightening my life. To have me here at this time, to get this new contract, to get into this bowl game, to get into a new stadium, to move into a new league. I have to also thank Rick Dickson and Dr. [Scott] Cowen for having faith in me. Even before, if you think about my career — which was a good career, but not what most head coaches have been through — I’m just grateful for the opportunity. I would like to thank these coaches for staying and sticking behind me, as well as the players. I’d also like to thank my wife, definitely, for my wardrobe. We have had too many meals, though. We need to lighten up a little bit.”