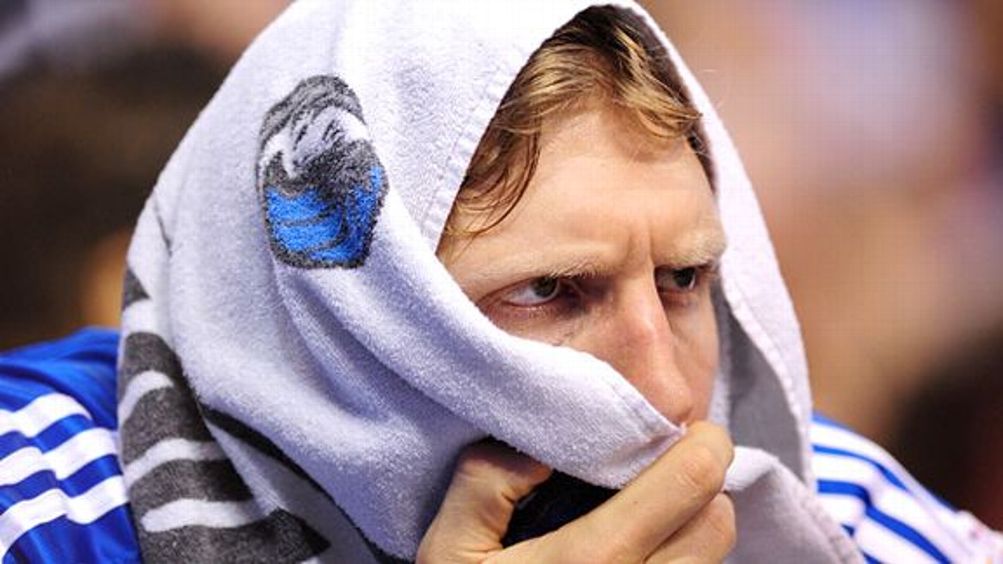 After this year of scolding and moral posturing, we have arrived at a final scene: Dirk Nowitzki — a simple man from vague origins — walks alone into battle against three mercenaries whose heedless and reckless pursuit of personal gain has unhinged the American Way. Everyone our hero has trusted and loved has either betrayed him (Jason Terry) or has died (Jason Kidd, Peja Stojakovic). And although the journey has long since lost its direction, the people’s hero pushes on, not because there is value in pushing on for pushing on’s sake, but because the audience demands its fill of blood and vengeance.

This is a profoundly silly way to describe a bunch of basketball players who are trying to beat another bunch of basketball players in a fully corporatized exhibition, but it seems to be the storyline that has boosted TV ratings and launched a thousand angry blog posts. The 2011 Finals, strangely, is the most metaphoric series in years, not because the Mavericks, or even Dirk, carry any inherent meaning, but because something must stand in opposition to Team Villain. The stats-and-replay revolution has freed sport of much of its weight and cleared the way for a more rational, genteel discussion,1 but the heroic song of Dirk versus the Heat — the one starring the blonde, bedraggled gunslinger and the three severely talented villains in black-and-red — has wormholed us all back to the 1950s, when every blade of grass on every field was idyllic, when every football game was won on abstractions such as “grit” and “desire,” when the outcome of a boxing match might tell something about ourselves and how we might get along.

William Munny was good at nothing but killing. He was not, in himself, a moral man. Nor were any one of Mifune’s samurais. Their “code” was nothing more than a litany of dead bodies. Dirk’s rampage through these Finals has carried that same balanced air of nihilism and awesomeness. And although Dirk cannot quite fill out the Munny/Mifune role because his demons are not as alluring or self-destructive, the hand-wringers and the altar-thumpers in the sports media have nonetheless anointed him as basketball’s redeemer. Meaning, if the Mavs beat the Heat because, say, Jason Terry goes Han Solo and shows up in Game 5 with a spaceship and his Wookie (Brian Cardinal?), the story of the Finals will devolve into a buddy movie in which the bad guys get their comeuppance, sure, but not before friends have their moment of reconciliation.

On Tuesday night, a violently ill Dirk got a little help from his teammates, and had anyone else hit the game-winning shot, the story of the 2011 Finals might have veered off into a less satisfying direction. But Dirk gathered enough of himself to keep the plotline rattling along. Our chosen narrative was salvaged, and, in many ways, the story of Dirk versus the Heat took on an even more familiar, dramatic dimension. Dirk, reduced and vulnerable, must now carry the Mavs across to a violent end.

Metaphors, especially the silliest ones, are fragile things strung out along the same old storylines. Of all the possible directions this series might take in tonight’s game, there are really only two outcomes that could properly finish the tale and satisfy the bloodthirsty public. In the first, the Blaze of Glory option, the Heat’s trio ultimately overpowers the Mavs, but not before Dirk fires off the rest of his ammunition. In the second, Dirk walks through Hell and blows up the whole goddamn thing, singlehandedly beating the Heat in a closely contested Game 7.

In both scenarios, then, all that matters is that someone die and die spectacularly. 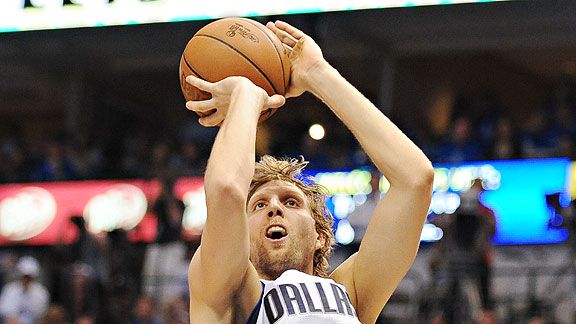 While the public perception of Nowitzki’s playoff burst has been that of a dead-eye shooter becoming simply unguardable, the reality is that Nowitzki really hasn’t shot any better than he did during the regular season. The biggest difference between the Dirk we knew in February and the one in the Finals isn’t accuracy; it’s volume.

What’s noticeably different aren’t Nowitzki’s raw totals, but his Usage Rate2, which estimates the percentage of the Mavericks’ offensive plays Nowitzki used while he was on the floor. The league average is obviously 20 percent, but a team with five players using an equal number of plays while they were on the floor wouldn’t do very well. Lineups need somebody who can create for themselves and produce opportunities for the other talents on offense while keeping the ball away from weaker offensive players.

Mario Chalmers is a telling example of such a player. Among players with 100 shots or more during this year’s playoffs, Chalmers has an Effective Field Goal Percentage (eFG%)3 of 54.7 percent, the Association’s third-highest figure. Of course, Chalmers can’t create his own shot or produce opportunities for other players, and he’s shooting so well only because teams are giving him wide-open looks. His usage rate in the playoffs is a paltry 15.1. If the Heat depended upon Chalmers to carry a heavier offensive load, his eFG% would almost surely plummet.

The qualifying player with the biggest drop in usage rate during this year’s playoffs is one LeBron James, who went from using 31.5 percent of the Heat’s plays during the regular season down to 27.0 percent during these playoffs, a 14.3 percent decline. And while it’s easy to imagine James choosing to defer to Dwyane Wade, James also had the largest decline in his usage rate during the playoffs last season, using 7.8 percent fewer of the Cavaliers’ plays during his final run with Cleveland. It could just be a two-year fluke (his usage rate increased by 7.7 percent during the 2008-09 playoffs), but it will be interesting to see if James’ usage rate continues to fall off during the playoffs over the next few seasons. The largest drop since the 1979-80 playoffs was Kobe Bryant’s disappearing act in 2006, when he took just three shots in the second half against the Suns in Game 7. Over the course of that entire seven-game series, Bryant’s usage rate dropped by a full 25 percent.

More minutes and more plays for Nowitzki have resulted in five more Mavs points per game during the playoffs, but as I mentioned in the introduction, Nowitzki isn’t shooting appreciably better during the postseason. That is admittedly hard to believe considering Nowitzki’s freakish performance from the 3-point line, where he’s hit a full 50 percent of his 42 attempts. And freakish doesn’t do his performance from the free throw line justice. Nowitzki has converted 163 of his 174 freebies (93.7 percent) this postseason. If we assume that his 89.2 percent success rate from the charity stripe during the regular season is the best measure of his actual ability to shoot free throws, the odds of Nowitzki going 163-of-174 are about 66 to 1. So where is he lacking offensively?

As you might expect, it’s on his 2-point attempts, which make up the vast majority of his attempts from the field. Nowitzki’s conversion rate on 2-point shots has fallen from a regular-season figure of 53.9 percent to 49.5 percent during the playoffs. He’s specifically fallen off close to the rim; according to splits gathered by HoopData.com, Nowitzki’s shooting percentage on shots within two feet of the rim has fallen from 71.2 percent to 59.7 percent. On shots within three to nine feet of the rim, he’s gone from 46.4 percent to 34.6 percent. His decline in those areas has countered those remarkable performances from the foul line and beyond the arc. His eFG% during the regular season was 54.5; after Game 4, his eFG% during the playoffs is at 52.6. He’s also turned the ball over more frequently, with an estimated 12.5 of every 100 Nowitzki playoff plays resulting in a turnover, as opposed to a 9.1 figure during the regular season. Throw all that together, and the Offensive Rating metric suggests that Nowitzki’s rate of offensive production during the regular season and playoffs is virtually identical: 118 points per 100 possessions in the regular season, 117 points per 100 possessions in his 19 playoff games.

Of course, not every shot is created equal, and it seems as if every close Mavericks game ends with Nowitzki going under his defender for a layup. Even though that’s important, taking a broader view of his game during these playoffs makes his impact pretty clear: It’s not a better Dirk, it’s just more Dirk.