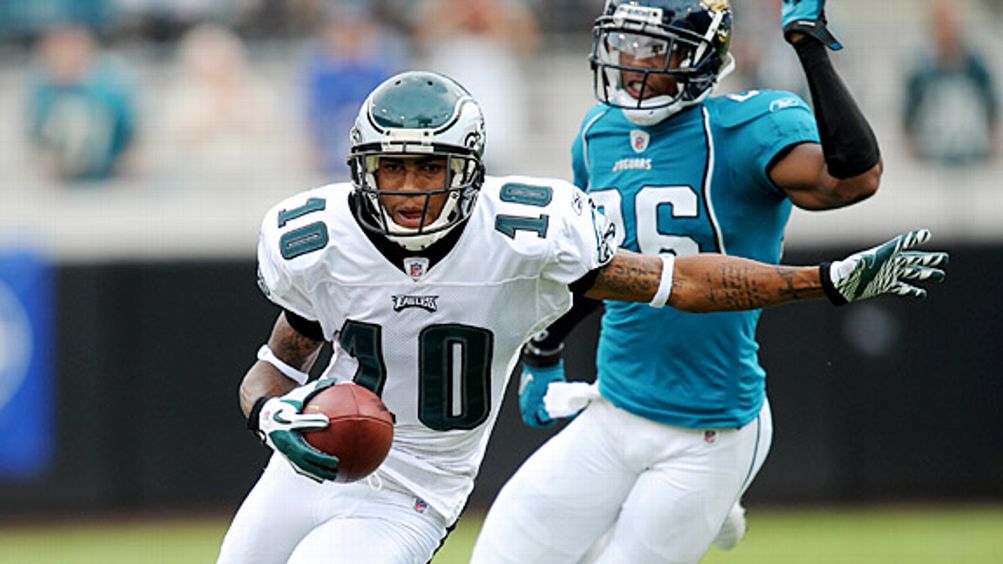 The dark cloud hovering over the heads of the Philadelphia Eagles seemed to clear up on Monday when holdout receiver DeSean Jackson returned to camp. Jackson had been hoping to get a new contract, but the Eagles’ largesse in long-term deals appears to be limited to new players at the moment.

With Jackson set to be paid $600,000 in the final year of his rookie contract, he’s unquestionably a bargain right now. It’s interesting, though, that the Eagles have neglected to lock up Jackson to a contract extension, as Philly is known for signing its young players to team-friendly deals before they hit the free market (think everyone from Todd Herremans to Reggie Brown to Trent Cole). So why haven’t Andy Reid and friends given Jackson an extension? And what might make him a bad bet for whichever team does?

Jackson has caught 172 of the 332 passes thrown to him during the first three years of his career, producing a catch rate of 51.8 percent. Among the 55 receivers with 200 targets or more over that time frame, Jackson ranks 47th in catch rate. He’s yet to catch more than 53 percent of the passes thrown to him in any of his three pro seasons.

Out of context, catch rate can be a very limited metric. Comparing the catch rates of Jackson and, say, Wes Welker (73.9 percent over the past three years) is unfair since Welker runs six-yard option routes all day, while Jackson routinely sprints 30 yards downfield. But things don’t get much better for Jackson when you start to take a deeper look at the numbers. There are several players similarly styled to Jackson who have better catch rates over the past three years. Lee Evans and Ted Ginn, neither of whom has lit the world on fire recently, have catch rates narrowly ahead of Jackson. Steve Smith of the Panthers is at 52.8 percent. Santonio Holmes is at 53.4 percent. Downfield threats Bernard Berrian and Dwayne Bowe are at 54.4 percent. The offensively limited Devin Hester hits 58.6 percent, while Santana Moss is all the way at 60.8 percent.

While catch rate doesn’t take quarterback play into account, every single one of these receivers played with worse quarterbacks than Jackson’s combination of Donovan McNabb, Kevin Kolb, and Michael Vick.

Team-adjusted plus-minus — an advanced metric I developed a few years ago — considers the quality of a receiver’s quarterback, the play of the pass-catchers around him, the length of a receiver’s routes, and the down and distance of each of his targets to build an expected catch figure. Over the past three seasons, it estimates that Jackson caught 16 fewer passes than he should have. That’s nearly 10 percent of his career total. At his career rate of 18.2 yards per catch, that’s just less than 300 yards left on the field over the past three seasons.

The game tape also suggests that Jackson isn’t catching the ball frequently enough, as the Football Outsiders Game Charting project marked Jackson down for 11 dropped passes last season, the fourth-highest rate in the league. In 2009, while Jackson had a more reasonable six drops, four of them came on plays in which the primary defender was listed as “Hole in Zone” — in other words, passes when Jackson was wide open and let a pass slip harmlessly to the ground.

All these incompletions kill Jackson’s efficiency. Even while averaging 22 yards per catch in 2010, Jackson’s DVOA (Defense-adjusted Value Over Average) was a middling 2.3 percent, which ranked 44th amongst receivers. He scored only six touchdowns as a receiver (adding one as a rusher and one on that punt return against the Giants to make eight overall), and that occasional quick strike is countered by all the times he wasn’t able to come up with a pass and the Eagles were forced to punt. DVOA has a propensity to underrate deep threats like Jackson, but other players with similar profiles have been able to sustain high DVOA figures with this style. Steve Smith of the Panthers, for one, led the league in DVOA during his third full season as a starter. Jackson was 23rd in DVOA in 2009, but he has yet to put together a truly great season.

Where do we go from here?

Jackson needs to take a leap forward as a receiver before the Eagles can justify giving him a contract extension with the sort of guaranteed money that Jackson is likely to seek. The history of advanced receiving metrics is extremely limited, since team-adjusted plus-minus and the Game Charting project go back only through 2005, but it’s hard to find a reliable receiver over that time frame who started off his career with such a low, raw catch rate. The only real example that stands out would be former Bengals wideout Darnay Scott, who caught 47.4 percent of the passes thrown to him during his first three seasons before hitting on 56.2 percent of targets over the rest of his career.

Under Andy Reid, the Eagles have been built around an efficient, reliable passing offense and a financial system designed to give the organization cost certainty by signing players to contracts below their market value. That’s entirely at odds with Jackson’s skill set and current station, which makes it hard to reconcile how Jackson fits in with Philadelphia after this season.