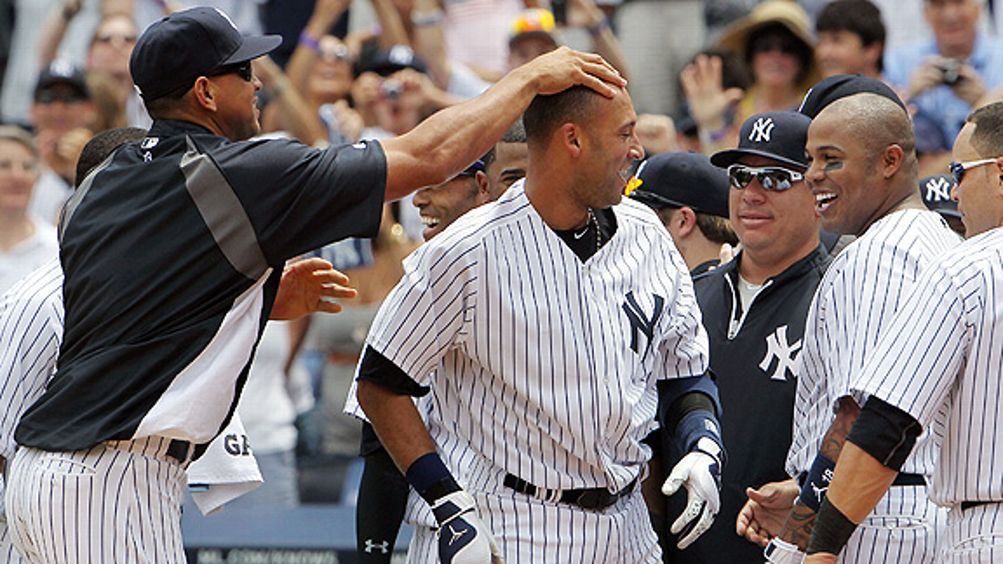 Derek Jeter is the spawn of Zeus, riding a lightning bolt of greatness down from Mount Olympus to enrich our excruciating daily existence. His 3,000th hit was a gift to all of humanity, a moment that temporarily ended all wars, solved world hunger, and gave us the greatest gift of all: umpires who don’t have their heads six feet up their own asses.

But that’s Jeter. On the day he retires, he’ll go down as one of the greatest players ever to play the game, perhaps the third-best shortstop. Derek Jeter was an all-time great long before he cracked his 3,000th hit.

Not so for other players creeping up on that number. If Johnny Damon plays two more seasons, he stands a chance to reach 3,000. If teams keep finding reasons to play Omar Vizquel, he could hit 3,000 by his 48th birthday. Unless you bet on baseball or get busted for steroids, 3,000 hits earn you automatic induction into the Hall of Fame, and a taste of immortality. A decade from now, we could be admiring bronze plaques for Damon and Vizquel alongside those of Ruth and Mays.

Advances in training methods, medicine, nutrition, and in some cases PED use have allowed hitters to last longer than ever before, and hit numbers once thought out of reach.

We’ve already adjusted our perception of juiced sluggers, such that 500 homers no longer automatically punches your ticket to all-time status. But when players like Damon start getting
serious Hall of Fame buzz because of round numbers, while far more deserving candidates get forgotten, do we need to chuck everything we thought we knew about numbers and what makes a player great?

The concept of greatness is often a subjective one. If you say a movie is great and I say it isn’t, there’s no objective way to settle the debate.1 Same goes for a song, a painting, or a burger. You see greatness in a Big Mac. I see it only in a Kobe beef burger, doused with truffle oil, sprinkled with gold flakes, and served from the top of the Stanley Cup, because I’m a big, fat snob. Neither of us is right. Or wrong.

Baseball is more easily, and necessarily, quantified. The difference between a .300 hitter and a .260 hitter, as we’re often told but never seem to fully grasp, is one bloop single a week.

Baseball can also be wildly deceiving. Our eyes and our hearts make us believe things which turn out not to be true. It’s not enough to see Jeter as a great player; he’s also developed a reputation as Captain Clutch. His teammate Alex Rodriguez came to be regarded as a choker, a player who pads his stats when his team’s up 10-2 but comes up small with the game on the line. Once these biases are in place, we look for evidence to confirm them. We remember Jeter’s successes and forget his failures, remember A-Rod’s failures and forget his successes. Never mind that neither player performs all that differently in clutch situations than he does the rest of the time.2

To solve this kind of disconnect, we count. The problem is our obsession with our fingers. We have 10 of ’em, which means base-10 numbers take on great meaning. We celebrate .300 hitters, ignore the .299 guys. We honor 20-game winners, vastly underrate those who frequently win 18 or 19. It’s a lousy way to count, one that obscures the greatness of players who happen to fall a tick short. You don’t suddenly become immortal when you go from 2,999 to 3,000 hits, just as you don’t suddenly become a safe driver who doesn’t blast Mr. Brownstone while doing 140 in a 90 zone on the day you turn 16.3

The first step toward getting it right is understanding context. If you watched Sandy Koufax in his prime, you’d swear he was the greatest pitcher who ever lived. Except he threw from a mound roughly 40 feet high, in ballparks the size of national parks, at a time when it was acceptable to play .200-hitting shortstops with no power as long as they could catch the ball. Players in Babe Ruth’s time played against only the best white players in America. Check that. During Ruth’s heyday, the art of scouting consisted of looking for players loitering in sandlots down the street from the ballpark. So, white guys who loitered. That was your competition.

The era in which a player played, the park he played in, and the competition he faced all matter when evaluating his legacy. Position and defense also matter: A shortstop or a third baseman shouldn’t be expected to hit nearly as many homers as a left fielder, because he’s providing a lot more defensive value by fielding his position. Ron Santo was an all-time great. Jim Rice was a very good hitter who had a few big years, benefited immensely from his home park, and hit into more double plays than all but five players in baseball history.

If the steroids era and greater longevity should make us rethink how we look at hitters’ numbers, even more dramatic changes should make us blow up old measures of pitcher quality. The very nature of how pitchers are used is radically different than it was 50 years ago. Back then, four-man rotations were the norm. Pitchers were expected to finish what they started. Bullpens were rarely used, and the role of shutdown closer hadn’t been developed yet.

Yet 300 wins remain the benchmark for starting pitcher greatness. Four of the greatest pitchers of all-time, Roger Clemens, Greg Maddux, Randy Johnson, and Tom Glavine, all retired within the past few years. The active leader in wins is Tim Wakefield, who’s pitched since the invention of the steam engine and still hasn’t cracked 200 victories. Starting pitchers didn’t suddenly become much worse than their forebears. The game simply changed for them, drastically.

So if 500 homers was too easy during the steroids era, 3,000 hits (or close to it) is too easy now because players last longer, and 300 wins is damn near impossible forever more, what do you do? What do you do?!4

The simplest way to recalibrate greatness is to use better numbers. Wins Above Replacement weighs a player’s offensive contributions, his defense, his base running, the era in which he played, and several other factors, then shows you the single most important measure of any athlete’s worth: the number of games he wins for his team. If you’re an 85-win team and you replace a scrub with a 5-WAR player, now you’re a 90-win team. That’s it.5

If you still can’t help but count your fingers, using a round number of WAR is still a better way to decide than with milestones that are either too easy or too difficult to reach. Choosing only players with 60 or more Wins Above Replacement for instance gives us a nice, neat 150 immortals. If you want to add bonus points for postseason heroics, or subtract for PED use, have at it. As long as your starting point is better than assuming starting pitchers still throw 275 innings a year.

Better yet, use a variety of measures, old and new, and don’t sweat the round numbers. Use batting average if you must, but also on-base and slugging percentages. Track hits and home runs, but also walks and doubles and triples. Great players come in many forms. The more methods you use to consider a player’s career, the more all-time greats with subtle skill sets will get their just due.

Derek Jeter’s career day was special because it culminated a truly historic career. If we stick to the same old standards, we may have to fawn over Juan Pierre in 2018. No one wants that.