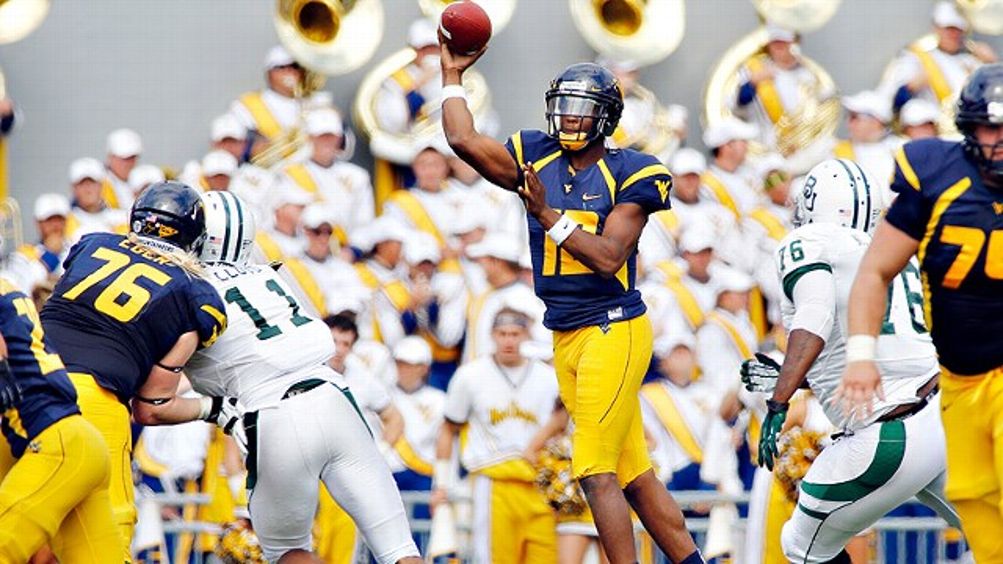 On Saturday, in West Virginia’s turbo-charged 70-63 victory over Baylor, Geno Smith had one of the greatest performances I’ve ever seen by a college quarterback. His statistics were staggering — 656 yards, 12.9 yards per pass attempt, an 88 percent completion rate, and eight touchdowns to zero interceptions — but it was the elegance with which he played the position that was most remarkable. I’m as intimately familiar with West Virginia’s offense as I am with any in the country, and I’ve never seen WVU’s head coach Dana Holgorsen’s Air Raid attack operate as well as it did last weekend with Smith running the point.1 Smith’s latest offensive onslaught has garned plenty of attention, but his mastery of Holgorsen’s offense isn’t new. His last five games — including four this season and last year’s Orange Bowl, in which the Mountaineers also scored 70 on a ranked Clemson team — have been as impressive as anything I’ve ever seen. Over that stretch, Smith has thrown 26 touchdown passes and zero interceptions.

Smith’s arrival in the Heisman race might seem sudden, but stretches like his current one do not materialize out of thin air. It takes time for any player, even one with Smith’s natural ability, to refine himself as an elite passer. Coaches, college ones in particular, often talk of “the light coming on,” the moment when a player goes from tentative and apprehensive to confident and decisive. For some, it happens suddenly, maybe during summer workouts or fall camp. For others, including almost all quarterbacks, it’s a more gradual process. Successive steps are taken to realize potential, until eventually, the moment arrives. Smith falls into the latter category, and now he — and anyone lucky enough to watch him play — is reaping the rewards.

Given West Virginia’s defensive issues (they gave up 63 points and 700 yards to Baylor), questions abound about their ability to remain undefeated and compete for a Big 12 or national championship. Still, Smith is deservedly the Heisman favorite, and with West Virginia’s top-10 matchup against Texas looming, Saturday will be a chance to see just how good Smith is. Then again, it’s important to understand just how good he’s already become.

September 24, 2011: Trailing 20-7 with 49 seconds left in the first half against second-ranked LSU, Smith stepped to the line. Given the choice between handing off the ball or throwing a screen pass to his left, Smith chose the latter. He took the snap and threw in the direction of his open receiver. The result was catastrophic. Coming on a blitz, LSU’s Tyrann Mathieu leapt up, batted the ball straight into the air, caught it, and raced to the 1-yard line. LSU scored on the next play, and, despite Smith’s 463 yards passing, the Mountaineers eventually lost, 47-21. “That’s on Geno,” Holgorsen would say of the play after the game. “If he thinks he can get it over him, he thinks he can get it over him … That’s something Geno has to do a better job of.”

After the Baylor game, Holgorsen was asked whether he was happy with the level of Smith’s play. “He was 45-of-51 for 656 yards and eight touchdowns and zero interceptions,” Holgorsen replied. “Can you please explain to me how you can improve on that?” Maybe the only one who saw how he could was Smith. Following the win, he was emphatic that it was not “his best game,” and, pointing to his six incompletions, stated that those were things he needed to fix. Holgorsen, when told of Smith’s self-criticism, cast his eyes downward and responded, “That’s just him. I worry about that with him at times. He expects perfection, which is impossible. In the game of football, perfection is impossible.”

Perfection may be unttainable, but it’s Smith’s pursuit of it that has made him better over time. Despite throwing for more than 4,200 yards last season, his preliminary NFL draft grade came back lower than he’d hoped, so he addressed the criticism head-on. Told he was too skinny, he added 15 pounds of muscle. Told his deep and fade passes lacked accuracy, he focused on them by working with quarterback guru George Whitfield during the offseason and throwing countless “bucket” passes — arcing throws aimed at an actual bucket. Spare time was reserved for hours of film of Aaron Rodgers and Tom Brady.

The result of Smith’s diligence was on full display in the past two weeks. A week after his added bulk helped guide him through a slew of hits from Maryland’s defense, Smith spent Saturday hitting receivers on goal-line fade throws and deep passes with an effortless flick of the wrist. Smith spent 60 minutes quieting those doubts about his NFL readiness. The man tasked with slowing him down this weekend, Texas defensive coordinator Manny Diaz, after watching game film of Smith: “In the NFL, pro quarterbacks can throw you open. What’s scary with Geno is he can do that with his third read.”

October 8, 2011: Clinging to a narrow 10-6 lead over Connecticut in the waning minutes of the first half, Smith completed a short pass on third down just past midfield. The result was fourth down with about a yard and a half to go. Smith frantically urged his teammates to the line. He took the snap on a quarterback sneak from under center — a play, believe it or not, that actually wasn’t in WVU’s playbook at the time. Confused, the offensive line got little push on Connecticut’s front. In the melee, Smith was knocked back so hard that his helmet flew off. Without it, he still tried to wildly spin out of the pile, before finally being tackled for a loss. After the game — a 43-16 West Virginia victory — Holgorsen said that although Smith was “capable of being as good of a quarterback as there is in college football,” he occasionally struggled “to play within the system, play within himself, trust the coaches, and trust the guys around him. Once he 100 percent understands that, he’s got a chance to be pretty good.”

An unfair but unsurprising label for Smith, given Holgorsen’s history, is that he’s a “system quarterback.” Prior to coming to West Virginia, Holgorsen spent just shy of a decade as Mike Leach’s eye in the sky (not to mention the position coach for future NFL receivers Wes Welker and Danny Amendola). In 2008, Holgorsen left Texas Tech to become the offensive coordinator at Houston, taking what he learned from Leach while adding his own Air Raid recipes to the mix. In particular, Holgorsen’s brand relies a bit more on running the ball to set up a vertical passing game. After leading the country in offense at Houston, Holgorsen went to Oklahoma State in 2010 (where the Cowboys finished second in the country in yards and points). The success in Stillwater led to a position as the coach-in-waiting and then, somewhat prematurely, the head coach in Morgantown. Everywhere he’s gone, all of Holgorsen’s quarterback pupils, most notably Case Keenum and Brandon Weeden, also set records and lit up scoreboards.

In this case, Holgorsen’s history can only do so much to detract from Smith’s success. A system is simply that — a systematic approach to attacking defenses, avoiding predictability, and putting players in position to succeed. Learning how to leverage defenses, find open receivers, and get his team in the right play is still a process.

The most common concern about system quarterbacks is that college productivity doesn’t translate to pro success, but for Smith, the plays he’s running, albeit in a spread offense, are essentially NFL ones. The running game is based on the inside and outside zone, the passing plays are found in every NFL team’s playbook in one form or another, and, this season in particular, Smith throws the ball vertically down the field. This is not the old dink-and-dunk Mike Leach offense — death by a thousand shallow crosses. Smith is making the safety move and hitting the deep post or corner for a touchdown, just like they do on Sundays.

Everyone points to the spectacular plays, but it’s making the system’s simple, routine plays that puts Smith in elite company. As Tom Brady is fond of saying, good quarterbacking is often as much about minimizing mistakes and making good plays as it is making great ones. “It really goes down to making routine plays,” West Virginia offensive coordinator Shannon Dawson said after the Mountaineers’ 800 yards of offense against Baylor. “You lose sight of that because everything in your mind goes to great plays.” Dawson’s description may sound bizarre, but true excellence is typically banal. Tom Brady and Peyton Manning each mastered the simple things to the point that they could perform them repeatedly, whenever called upon, no matter the situation. Being a quarterback is maybe most of all about making the difficult look routine and, at the college level, Smith is doing just that.

October 21, 2011: Under constant harassment from Syracuse defenders — particularly defensive end (and current New England Patriot) Chandler Jones — Smith was in trouble. Down 35-16 with less than 20 seconds left in the third quarter, the Mountaineers were desperate to make a play. Facing another downfield pass, Syracuse blitzed. Smith, trying to escape the rush, stepped up in the pocket and heaved the ball in the direction of his former high school teammate, Stedman Bailey. The ball, badly underthrown, was intercepted — it was Smith’s second of the game, and both were on forced passes to Bailey. West Virginia, a heavy favorite, lost, 49-23. Syracuse did not win another game the rest of the season. “We sat in here as an offense and we went through every play and we said, ‘Here’s how you attack it,'” Holgorsen explained the week after the game. “We could have easily scored more than 49 points and won the game, but we didn’t do that. We need to be able to handle it better.”

Smith’s early-season dominance has drawn frequest comparisons to last year’s Heisman Trophy winner, Robert Griffin III, a comparison that is not particularly pat. Smith, unlike Griffin, is not a dual-threat quarterback. He lacks the former Baylor star’s breakaway speed. It also appears that Griffin has slightly more arm strength. The basis of the association is in their September success, but Griffin didn’t win the Heisman in the season’s first month. Baylor would lose to Kansas State, Texas A&M, and Oklahoma State along the way, but it was thrilling victories over Oklahoma and Texas that propelled Griffin back to the top of the race. If Smith wants to win the Heisman, he’ll have to follow Griffin’s lead in those major tests on the biggest stages. And that begins this weekend against Texas.

There’s one more way in which Smith and Griffin are similar. Griffin won his Heisman with that November stretch, but he also won it because no one but Art Briles, first at Houston and then at Baylor, thought he could play quarterback. He won because he tore his ACL three games into his sophomore season and came back the next year to a 7-6 Baylor team that ended its season with four straight losses. In short, he won it when he overcame setbacks few of us even saw. Smith has taken a similar journey, from good quarterback to Heisman favorite, from man to could-be football legend. As Griffin’s journey was at this point, Smith’s is far from over, but no matter what happens in Austin on Saturday, there’s no denying how far he has already come.