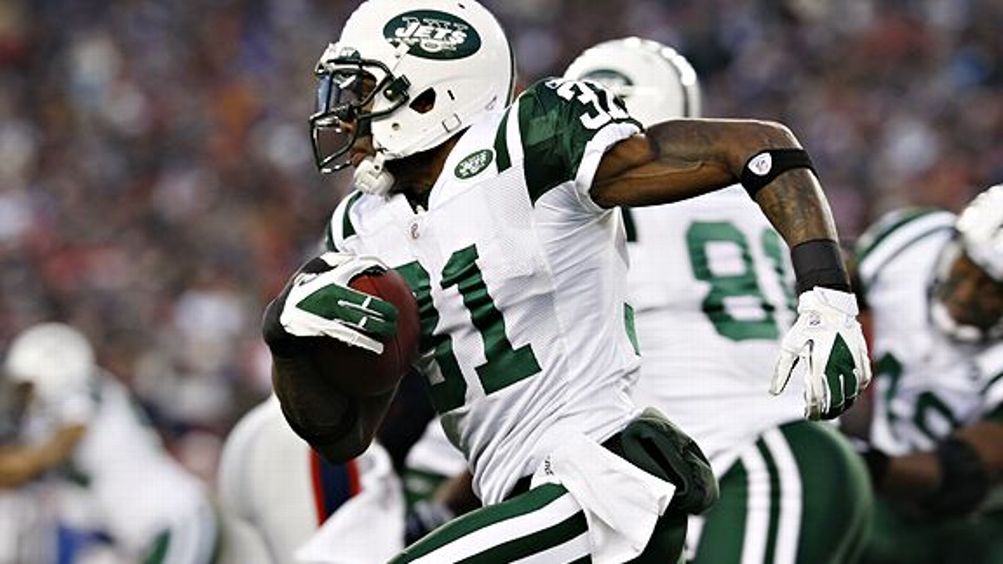 During the first truly quiet day of free agency, the Panthers made a terrible signing, the Jets paid top dollar for a veteran defender, and the Eagles stared at themselves in the mirror, smug and satisfied, like Patrick Bateman in American Psycho. And the Raiders, well, the Raiders gave out the sort of contract that causes lockouts to happen.

In short, everyone just did what everyone does.

One thing was clear: The speculation period on franchise-changers has ended. Front offices have begun to shop for need, acquiring players almost solely because they’re an upgrade at the team’s weakest position(s). That usually means one-year contracts for whichever veteran players are left on the market.

Only one player was able to get a healthy payday before the checkbooks were tucked away. His contract is one of the last big-money, long-term deals you’ll see for an unrestricted free agent this offseason.

When Settling Pays Off

Antonio Cromartie is, by all accounts and measurements, a slightly above-average cornerback. All his positives have negatives and all his negatives have positives. He has a reputation as a ball hawk because he picked off 10 passes in 2007, but as we noted in the Grantland free-agent preview, he has just eight picks in the three seasons since.

Cromartie fell to the Chargers with the 19th pick of the 2006 draft because he had an injury-prone rep in college. He has missed only one game as a pro. He ranked ninth in the Football Outsiders Defensive Success Rate1 statistic a year ago, but that came in a season playing across from Darrelle Revis. His 6.0 yards per pass attempt were 16th in the league, which was solid, but Cromartie also had a nasty penalty habit. He picked up eight penalties on the year for a total of 77 yards, producing seven new first downs for opposing offenses in the process.

There’s no word yet on what Cromartie’s guaranteed money looks like, but the Jets gave him a four-year, $32 million contract. It’s safe to guess that about half the deal is in guaranteed money. That’s just about right for a player who really is one of the league’s better second cornerbacks, but Cromartie’s a big winner because of timing and context. Had the Jets grabbed Nnamdi Asomugha away from the Raiders, they would have had no need to give Cromartie this sort of deal. He would have likely hit the market and ended up signing a one-year deal with a team like the Raiders or the Lions. Cromartie’s more valuable to the Jets than any other team by virtue of already knowing the playbook and buying into what Rex Ryan is preaching. Playing across from Revis will make him look great over the next few seasons, and, at 27, he’ll likely be able to land one more contract for good short-term money after this one.

The Jets need Cromartie because he’s the last cornerback of this caliber available on the market. Cromartie should take Nnamdi Asomugha to The Cheesecake Factory; Asomugha just made Cromartie a lot of money.

When Redefining the Market Gets Weird

The last contract the Raiders gave Nnamdi Asomugha reestablished the market for cornerbacks by drastically upping the previous record deal. Back in 2007, Nate Clements signed an eight-year deal for $80 million (which lasted only four years), producing an average annual value of $10 million. He received $22 million in guaranteed money. Asomugha’s contract with the Raiders was a three-year deal worth $45 million; it lasted two seasons, but Asomugha had an average annual value of $15 million and picked up $28.5 million in guarantees.

When Darrelle Revis was negotiating his deal with the Jets last year, it wasn’t the Clements deal he was basing his demands off of; it was the Asomugha deal. The next elite corner will negotiate his deal off of Revis. This is how dramatic salary inflation happens and why poor Jerry Richardson spent the summer threatening to give Drew Brees and Peyton Manning remedial math lessons before shelling out $280 million on players after the lockout. Owners hate spending, but they’ve gotta keep up with the Joneses. Or the Davises.

On Monday, the Raiders re-signed outside linebacker Kamerion Wimbley by giving him a five-year, $48 million deal that guarantees him $29 million. It is one thing to pay for Asomugha and set the market for dominant cornerbacks; Al Davis probably overpaid and helped create massive inflation for elite cornerbacks for years to come, but at least he was signing a truly excellent player. Wimbley is a pretty good pass-rusher who had 11 sacks as a rookie in 2006. He’s averaged just more than six sacks per season since, and although he had nine last year, three of them came in a meaningless Week 17 game against the already playoff-bound Chiefs.

Stare at that $29 million figure, because it’s truly grotesque. It’s nearly 50 percent more than the guaranteed money James Harrison got from the Steelers on his five-year deal after he won Defensive Player of the Year with a 16-sack campaign. It’s more than Asomugha was guaranteed in either his contract with the Raiders or with the Eagles. It is the sort of deal only Al Davis would make.

The Giants locked up Ahmad Bradshaw with a four-year deal. Signing a veteran running back who isn’t at the Adrian Peterson level to any sort of long-term contract has been a dangerous concept, but the Giants should really know better. After the 2008 season, they locked up then-starter Brandon Jacobs to a very reasonable contract that gave him $25 million over four years. Jacobs lost his starting job to Bradshaw a year later and was viewed as a guaranteed offseason cut before a late-season run of effective performances put him back in the running back rotation.

There is no guarantee that Bradshaw will burn the Giants, too, but there are reasons to be concerned. He’s only 25, but he’s fumbled once every 40 touches as a pro — the highest rate for any current running back with 500 career carries or more. The average back in this group fumbles once every 97.3 touches, and most of the closest players to Bradshaw in the group are complementary backs like Reggie Bush and Kevin Faulk. It’s a huge problem that takes away a good amount of Bradshaw’s value, and considering that he’s a below-average pass-blocker and a mediocre receiver out of the backfield, he’s not really delivering all that much value to begin with.

The Giants should have saved their money here, found a veteran back like Clinton Portis to play off of Jacobs’ strengths, and used the extra cash to re-sign defensive end Osi Umenyiora, who is pursuing a trade to a team that will give him a contract extension.

The Panthers signed Derek Anderson. The most plausible explanation for why the Panthers would sign one of the league’s worst quarterbacks is that they want to tell their fan base that Cam Newton won the job out of camp. By having him “compete” against Anderson and Jimmy Clausen, they clear the path for their no. 1 pick. The second most plausible explanation is that Derek Anderson has videotapes of someone doing something really bad.

Some positivity: The Titans re-signed promising defensive end Jacob Ford to a one-year deal. Unfortunately, the Titans appear to be moving to a different flavor of the 4-3 that emphasizes bigger ends, which should marginalize the 249-pounder. Tennessee’s probably not the right place for Ford, but there wasn’t a market for him after a disappointing 2010.

Eagles defensive tackle Brodrick Bunkley refused to report to Cleveland after being traded there over the weekend, so Philadelphia canceled the trade and dealt him to Denver for an undisclosed pick. It was a smart move for Bunkley, as the Broncos are dangerously thin at defensive tackle. He will see more snaps in Denver than he would have in Cleveland.

The Dolphins signed tackle Marc Colombo, making him the latest in a run of offensive linemen to make the trip from Dallas to Miami, where former Cowboys offensive line coach Tony Sparano is the headmaster. This sort of do-si-do is cute when Bill Parcells does it because he ends up getting great production out of forgotten favorites like Anthony Pleasant and Jason Ferguson, but the Dolphins have gotten only disappointing production from Cowboys castoffs such as Pat McQuistan and Joe Berger. Adding a player such as Colombo from a line that was terrible last season is a questionable move.