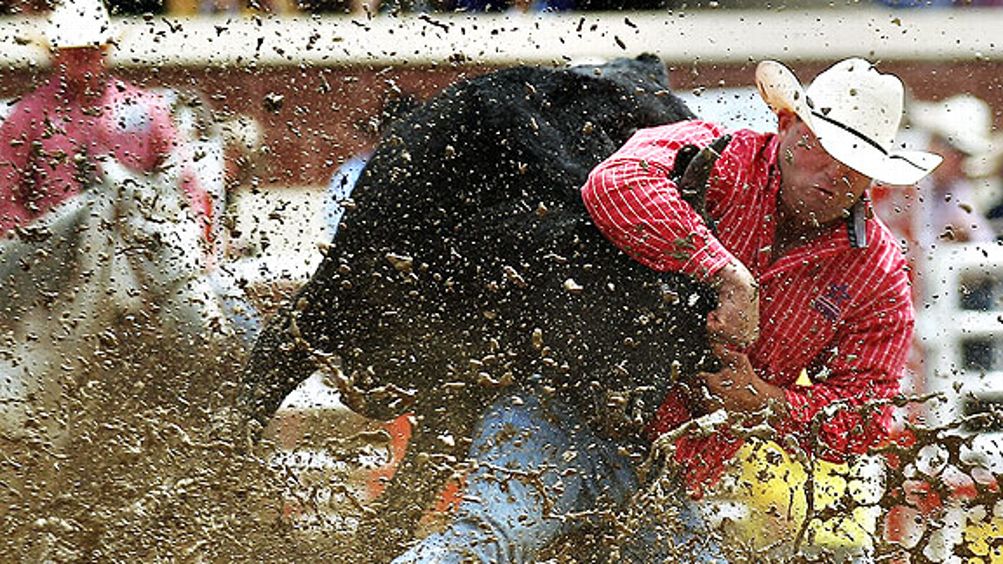 During the annual Calgary Stampede, a massive urban rodeo and cowboy-culture exhibition, an oil town of more than a million people turns over to cowboy hats, tall boots, blue jeans, pearl snaps, and garish belt buckles. For some, the nod to country style is in fact a way of life. For others, it is cowboy Halloween — costumes minus the character. My first night at the Stampede, a group of friends and I closed down a massive yard party, then wandered to an Italian restaurant that had set up a South Beach-style lounge under tent cover on the sidewalk. Before long, a scuffle broke out. Someone threw a punch; someone else swung a stool. In a blink a dozen guys were bum-rushing one another and crashing over the ropes into the couches of the VIP section, kicking, pushing, punching, yelling. A peacemaker walked over to try to talk sense and got a stool swung against his temple. My friends and I edged to the door. A moment later the man at the middle of the attack strode out, pink as a ham, his face running with blood. Police sirens dispersed the melee. Our broken table and drinks lay strewn on the ground.

There’s no rodeo quite like the Stampede. The capstone to the season is the National Finals Rodeo, in Las Vegas, where the top cowboys ride against each other for prizes worth more than $5 million. There are other major events — RodeoHouston, Cheyenne Frontier Days — but the Stampede is a thing apart. Most rodeos collect entry fees from dozens or hundreds of cowboys and pit them against each other for a few thousand dollars. In Calgary, just 20 roughnecks are invited to compete in each of six events,1 splitting a total of $2 million and riding the top horses and bulls in the business. “It’s the best of the best on the best of the best,” is the way Wyoming bareback rider Kelly Timberman sums up the Stampede.

From July 7 to 17, the Stampede’s cumulative attendance was nearly 1.2 million. That averages out to a number close to the attendance at this year’s Kentucky Derby — for 10 straight days. Rodeo events transmogrify frontier chores into spectator sport, and because of that they’re popular in many places where people still work closely with horses and cattle: Australia, Brazil, Canada. In North America, the rodeo is often just the centerpiece to the sort of itinerant carnival that celebrates and sells a fading notion of Western life. Anyone can pull on some boots, admire the horses, and walk through the same straw as real cowboys. It is ritual and spectacle and rite, all in the same harness. Surrounding the Stampede Park Race Track are permanent grounds reminiscent of a county fair. Whack-A-Mole and ring-toss stands share real estate with food vendors slinging the deep-fried, chocolate-dunked, sno-conical Tour de Diabetes that seems mandatory at these happenings. Nearby, gut-slugging collapsible rides evoke simpler times of traveling circuses and laissez-faire tort law in the hearts of some, while evoking chicken schnitzel and fried Oreos in the mouths of others.

The life of a professional rodeo cowboy is a hard one. The season is set up a little like a pro golf tour, except there are hundreds of events and most pay poorly. In the riding competitions judges score the form of both the cowboy and the animal. If a rider hangs on for a full eight seconds, half his points come for his own execution and half come from the animal’s performance, which represents the degree of difficulty. In steer wrestling, tie-down roping, and team roping scores depend simply on speed. It is routine, then, that a rider travels hundreds of miles, buys his gas, buys his meals, sleeps in his truck or in stale-sheet motels along the way, arrives in Rapid City or Tupelo or Tonganoxie, puts in his ride, maybe wins a check, and is back on the road before his name has stopped echoing off the aluminum bleachers. Generally, he will be paid — or not — for between three and eight seconds of work. Outside of professional bull riding, which is popular enough to command bigger checks, the best rodeo cowboys in the world earn about $200,000 in a very good year. Most command far less.

Take Shane Hanchey,2 a tie-down roper from Sulphur, La., who was riding in his first Stampede. He banked $16,000 in his first four days in Calgary and won the right to return for the final. Normally, 16 large is a lot for a cowboy. Hanchey had an extraordinary 4th of July weekend — known, because of its abundance of rodeos, as “Cowboy Christmas” — in which he won a cool 25 grand. By his reckoning, the sum was the fourth-most claimed by anyone in the Professional Rodeo Cowboys Association over that time. But here’s what he and his driver had to do to get it:

“If all of them were like the Stampede,” he said, “it would be easy to make a living. We’re the most underpaid professional athletes in the world.”

On the final day of qualifying rides for a batch of cowboys seeking the Stampede’s $100,000 top prize, overnight showers and a cloudburst at noon turned the arena into gruel. When a tractor combed the ground, a kind of rodeo Zamboni, it left behind a sheen like freshly poured cement begging for initials. A steer wrestler named Dean Gorsuch leapt from his horse to his running steer and slid a good four yards on his ass. Another competitor, Dane Hanna, tried planting his feet as he grabbed his steer’s horns; he found no traction and instead skated alongside the animal for five seconds (an eternity in an event often concluded in less than four) before finally flipping the beast. Well out of money contention, he celebrated the moral victory by making snow angels in the slop.

Broncs and bulls slung mud as they bucked under their riders, and before long us fans were speckled with sand and slime. Cody Whitney, a cowboy from Oklahoma, turned in his best ride of the week dressed in a full rain suit. The arena announcers said it was at the urging of his wife: Living in an RV, with no ready access to a washing machine, she apparently insisted he find a way to stay clean.

When your business is subjecting yourself to controlled disaster, you can’t help but take on a bit of fatalism. Four-time Stampede saddle bronc champ Rod Hay watched from the sidelines this year — a casualty of a broken leg suffered earlier in the season. “I shattered my femur,” he said, as casually as that sort of thing can be said. “I actually won the rodeo, and the horse bucked me off at the whistle, and it kind of twisted and that femur just popped. But they’ve got ‘er back together and straightened back out.”

Hay, 42, hopes to return and defend his titles. He’s a graybeard in cowboy years, but he was having a great season before the biggest bone in his body exploded. He found interim work as a TV analyst for the Stampede, and watching the other riders had Hay contemplating a comeback: “Kind of gives a guy a bit of an itch, actually, to run down and get on one.”

After the torrents, the wet played hell with the horses. When the broncs couldn’t find purchase with their hooves, or when they kicked mud up against their bellies, it made them move in unpredictable ways. Too skittish and a cowboy can’t max out his points. Too wild and bad things can happen.

Both befell Jeff Willert. The former saddle bronc champ burst out of the chutes atop a brown-and-white horse named Hoop Dancer who churned and thrashed but wasted a lot of energy bounding toward the middle of the arena. After eight seconds, it was time to get off, but before Willert could make a clean dismount the horse fell over with him still in the saddle. Willert turned toward the chutes, toward help, and at that instant of pain screamed a phrase that you could read on his lips more than hear: “OH, FUCK!” Men ran to him and helped him to the fence. He limped away with a sixth-place score, and the show went on.

A little while later, in the modest lounge that served as a locker room, cowboys slouched in love seats and overstuffed chairs along cinderblock walls. The room smelled of fossilized sweat and leather saddles. Tape and bandages littered the entrance to the men’s room; a cup of tobacco spit and an empty Budweiser bottle marked the time spent on the sofas.

Willert hobbled in. He carried his saddle to the middle of the room before dropping it. He spat three vulgarities in a space of six words, and then apologized. “I don’t like that horse,” he said. He got cleaned up in the washroom, then came out and tried to knock clumps of dried mud off his shirt before he tucked it, still filthy brown, back into his jeans. “Want to borrow my Tide pen?” someone asked.

The good news was that he had only twisted his ankle. Willert asked Jesse Bail, another saddle bronc rider, “What’s your plan?”

“I don’t know what the hell I’m doing,” Bail answered. They tried to figure out what city might be next. Who was driving where. Whether to hitch a ride. How to get back. Where the next eight seconds of work might take them.

As they pondered, the rodeo clown walked in. Mud splattered his bright green jersey and freckled his red-and-white painted face. He took the slow steps of a man who had just finished a shift on his feet. He turned a corner, then returned carrying one shoe and sock, shuffling back down the hall with one bare foot on the cold floor — he, like the rest, stoic, silent, and until tomorrow, shot.

Sam Eifling has won regional and national awards from the Society of Professional Journalists for his sportswriting. He’s a master’s candidate in journalism at the University of British Columbia, in Vancouver. On Twitter, he’s @sameifling.