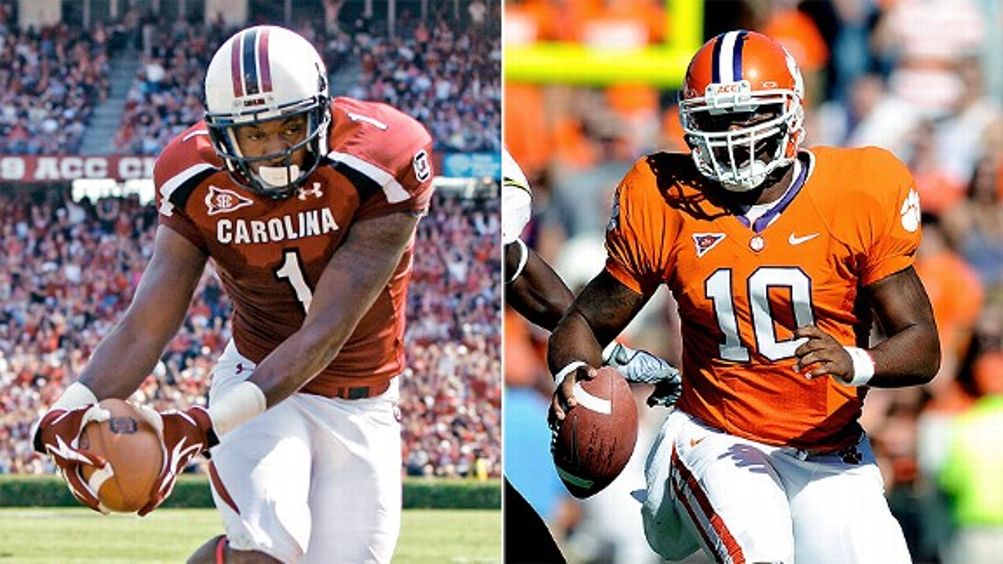 Editor’s note: For Rivalry Week, we invited the sports editors of several college newspapers to compete in a friendly write-off. To vote on who won, visit our Facebook page. To read the first and second parts of the series, click here and here.

The South Carolina-Clemson game rarely gets much in the way of national attention, but for the people of South Carolina, it is everything.

The second-longest continuous rivalry series in the nation — and it would be tied for first with Lehigh-Lafayette if not for an unfortunate six-year hiatus due to an armed standoff between South Carolina students and members of Clemson’s corps of cadets after the 1902 game — Carolina-Clemson is a yearlong obsession that knows no end. From the water cooler to the fellowship after Sunday service to the online message board, it is life in the Palmetto State.

This season’s edition of the rivalry, the 109th meeting between the two schools, is likely the most anticipated in history. Both teams are ranked in the top 20 and enter the game with nine wins each for the first time. When 7:45 p.m. rolls around on Saturday at Williams-Brice Stadium in Columbia, anything and everything will be on the table. To be honest, no one really has any idea what the hell is going to happen. During the summer, South Carolina was expected to be the better of the two teams. By the end of October, Clemson was 8-0 and ranked in the top 10, causing public opinion on who might win the season finale to swing in its favor. Now, with Clemson having lost two of its past three and USC regaining confidence in the wake of losing star tailback Marcus Lattimore, it’s really anyone’s guess.

But since the objective here is to make that guess, here goes: South Carolina will win. Not necessarily because it is the better team, but because it needs it more.

This has been, by all reasonable accounts, the greatest season in the history of South Carolina football. The Gamecocks won their most SEC games (six) in school history, and tallied a 5-0 record against the rest of the SEC East. USC defeated Florida, Georgia, and Tennessee for the second straight season. At 9-2 overall, the Gamecocks are a win away from tying the school mark for wins in a single season — South Carolina has won 10 games only once in its 118 years of existence as a program — and two victories from a once unfathomable 11 wins.

But while Clemson’s 9-2 record has earned the Tigers a trip to next week’s ACC championship game in Charlotte against Virginia or Virginia Tech, the Gamecocks will be done after Saturday until their bowl game. Most years, South Carolina’s 6-2 league finish would be enough to win the SEC East — the Gamecocks won the division with a 5-3 conference record last season — but this has been an unusual year. The Gamecocks beat Georgia in Athens on September 10 only to watch the Bulldogs win seven straight conference games while USC suffered a reasonable loss at now-no. 3 Arkansas and a horrific one to Auburn at home (that game will be known to future generations as Stephen Garcia’s Last Stand). Now South Carolina will be forced to watch the Georgia team it beat play in the SEC championship game.

As a result, this game against Clemson has become South Carolina’s championship. The Gamecocks can’t win the SEC, a goal that has driven (and haunted) them for nearly 20 years, but they can still win the state championship. They can still beat Clemson — a win would give them three straight in the series, which they haven’t done since the Nixon administration — and get their 10 wins. And they can do it at home against their hated enemy, which happens to be fortunate enough to have bigger fish to fry a week later.

Who wins and who loses will boil down to the battle between South Carolina’s defense (by far the strength of the team) and Clemson’s offense (ditto). First-year Clemson offensive coordinator Chad Morris has become a hero in Tigertown due to his high-powered spread offense, but his unit will now face its biggest challenge yet — a veteran South Carolina defense anchored by a dominant front line and led by associate head coach Ellis Johnson, a South Carolina native who once coached at Clemson and has won equal acclaim from Gamecock fans.

Both sides will get the best of the other at various points Saturday, but when the game is on the line, South Carolina’s defense will rise to the occasion and seal the win in the final moments. This game is the most anticipated in the rivalry’s history because, for the first time in a generation, both teams can legitimately claim to be among the best in the nation. It would only be fitting if the season ends with both claiming a championship of sorts.

In the state of South Carolina, few things are as important as the annual meeting of the football teams from its two biggest universities. For the die-hards who live for the season-ending showdown, there is nothing more important.

Throughout autumn in the Palmetto State, there is a gradual buildup of anticipation for Thanksgiving weekend — not for the turkey and cranberry sauce, but for the rivalry that has defined the state’s sports landscape for more than a century.

The Clemson-South Carolina rivalry means everything to the people who reside between North Carolina and Georgia, but it’s a tradition that remains largely unnoticed outside the state’s borders. The average delusional Tigers or Gamecocks fan doesn’t understand why the nation doesn’t care about the most important day in their state aside from the Republican primary. Just ask a fan of either team about the game’s significance, and be prepared for comparisons ranging from Auburn vs. Alabama to the world vs. world hunger.

With such a narrow perspective, it’s difficult to understand why a rivalry with so much passion, pride, and unabashed hatred can be virtually a side note for the rest of the college football world. The answer is unwelcome, but obvious: The teams are never any good.

The reason games like the Iron Bowl and the Michigan-Ohio State rivalry are so historic is because they are nationally relevant. In a given year, either one of those games could have BCS or national championship implications. The battle for (not even kidding) the Hardee’s Trophy? Not so much.

It’s a discouraging truth to acknowledge. Despite a reasonable amount of talent passing through the Clemson and South Carolina programs over the years, both teams have remained painfully average.

It’s unfair, though, to lump these programs together from a historical perspective. Clemson at least has a national championship to its name (1981), as well as a number of ACC championships. The Tigers haven’t won a conference championship in two decades, however, and though Death Valley is still a raucous atmosphere, the fear it used to instill in Clemson’s opponents hasn’t been as noticeable since the end of the Danny Ford era.

With that said, South Carolina’s football history makes Clemson look like a perennial juggernaut. The Gamecocks are just four games over .500 all-time and have won just four bowl games. They posted an impossible 0-11 record in 1999, Lou Holtz’s first season as head coach. Holtz is just one victim of the “South Carolina coaches graveyard,” where legendary careers have gone to die.

Most years, Clemson’s underachievement and South Carolina’s mediocrity have combined to make a potentially intriguing rivalry irrelevant to the majority of the nation. But for once, with both teams making strides to national relevance (each is ranked in the top 20), this year’s matchup between the Tigers and Gamecocks has some meaning outside South Carolina.

Little was expected of Clemson this season. The Tigers were coming off their first losing season in more than a decade and sporting a new offensive coordinator, Chad Morris, and a new quarterback, Tajh Boyd. Early on, it was clear that Boyd’s abilities jelled perfectly with Morris’ scheme, and Clemson began to pile up wins, climbing as high as no. 5 in the BCS standings before suffering their first loss of the season at Georgia Tech. The Tigers clinched their second ACC Atlantic Division title in three years with a come-from-behind win over Wake Forest, and have put themselves in position to win the school’s first conference championship since 1991.

On the other side, South Carolina entered the season with perhaps its highest expectations ever. The Gamecocks hoped to build on their 2010 SEC East title and move into the BCS conversation. Things haven’t gone as smoothly as planned, however. After throwing the ball to the wrong team for five games, embattled quarterback Stephen Garcia was finally dismissed from the team for failing a drug test. Connor Shaw has filled in adequately, but the Gamecocks still fell short of the winning the East despite a better SEC record than last season. A season-ending injury to star running back Marcus Lattimore was a devastating blow that has left South Carolina with no offensive identity. Steve Spurrier’s team has won its share of games, but not in glamorous fashion.

The most tantalizing matchup defining this year’s edition of the rivalry: Clemson’s offense vs. South Carolina’s defense.

The Tigers’ dynamic attack features Boyd and a number of talented weapons that have shredded opposing defenses to the tune of 35.1 points per game. Freshman wide receiver Sammy Watkins has been outstanding, and his presence on the outside makes his teammates better. Andre Ellington’s ability as a running back keeps Clemson multidimensional and adds one more element for defenses to stop.

The talent in South Carolina’s front four is enough to sustain the rest of its defense, but it also makes their defensive numbers somewhat deceiving. What the Gamecocks’ relentless pass rush disguises is a subpar secondary that has been exposed by their opponents who could actually complete a forward pass (ECU, Georgia, Arkansas). If Boyd gets enough time in the pocket, it could be another long day for South Carolina’s defensive backs.

South Carolina’s offense is a shell of its former self without Garcia (2010 version) and Lattimore. It’s no secret that the Gamecocks want to win with defense. They have scored 17 points or fewer in three of their past four victories. Against Clemson, those 17 points won’t be enough, and with only one high-caliber threat left on offense (wide receiver Alshon Jeffery), that will be a struggle. Clemson’s defense is pedestrian and susceptible to the big play, but if the Tigers’ front seven can contain South Carolina’s running game, Shaw is not capable of beating Clemson with his arm.

Clemson leads the all-time series between these two teams 65-39-4, so it’s often been missing the semblance of competition needed in most rivalries, but South Carolina has won the past two games in the series and is looking to win three straight for the first time since 1970. Clemson and its powerful offense will make sure that doesn’t happen.