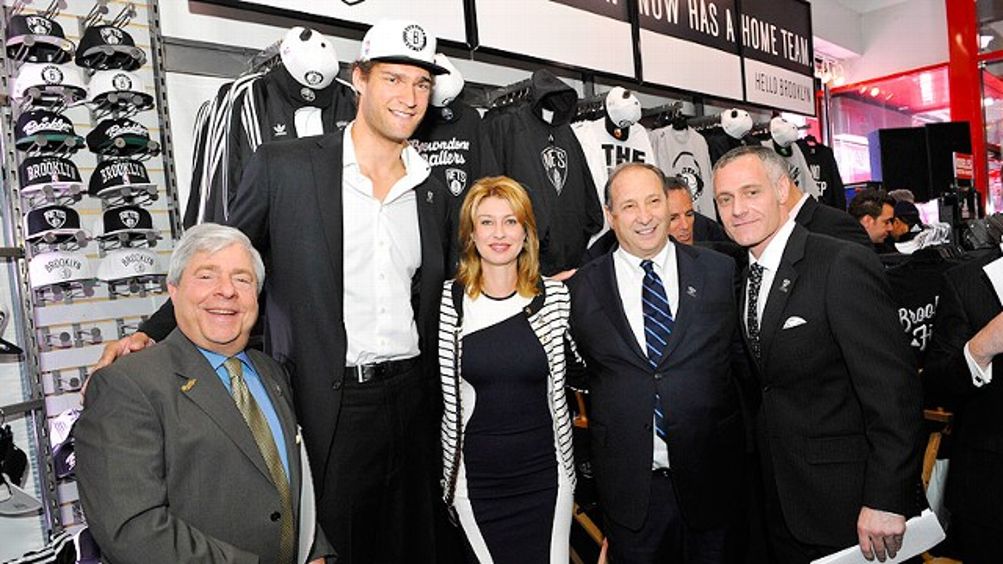 S ometimes I wonder what it was like to live when hatred and disgust for individual players and teams was primarily born of repetitive meetings based on regional rivalries and annual playoff showdowns. Now, we have so many more reasons to root against teams and the constructed villains who play for those teams. All you have to do is marry and divorce a Kardashian to inspire a season of boos in opposing arenas. The success of a team like the Heat can be rejected as the product of an overnight success scheme, resented by the fan bases that lack a team president with ‘historical cred.’

While monitoring the reconstruction project that is the Brooklyn Nets, it has also become clear that we openly resent teams who show no artistry or patience, who seem unwilling to incubate a ‘winning culture.’ In the past few weeks, we’ve found out who will actually be on the Barclays Center court when the season starts, and it feels like the Nets have taken the most inorganic approach to assembling a team. The new Nets are a blank slate. Their player personnel strategies have been those of a team interested only in attracting fans, not retaining them.

These are the ways in which the Brooklyn Nets have failed as an NBA rebranding project.

The Brooklyn Nets were forced to settle for a tier of players with inflated value. I can’t help but think of Deron Williams and Joe Johnson as the only ‘stars’ that would be attracted to an unproven franchise because it was in a ‘major market.’

It’s hard to remember who Deron Williams actually is — he has basically been M.I.A. for two seasons due to injury and/or strategic tanking. Apparently he played well enough to have his number retired by the Turkish team Besiktas after a few games in Europe during the lockout. It will always be difficult for me to understand his decision to give up on the Utah Jazz, where he forced a trade in early 2011. Without another Westbrook-to-his-Durant young gun to earn his lumps with, it may have seemed impossible to achieve anything — especially knowing there was no way in hell one of his Olympic colleagues would want to sign in Utah to form a superteam of their own. It’s easy to forget that in 2007, Williams led the Jazz to the Western Conference finals, where they lost to the eventual NBA champion San Antonio Spurs. I hardly remember that, probably because it must have been a crappy NBA season if the Spurs won the championship.

Maybe Williams felt like he could never win the fight against fellow draft-class mate Chris Paul without elevating his brand in a new market. CP3 ‘wanted more’ than just carrying the Hornets every year, and he wasn’t accused of being above a small market. He single-handedly made the Hornets relevant until the very end. Can you really be a ‘franchise guy’ if you go M.I.A. for two seasons of your prime?

Joe Johnson is even more enigmatic than Deron Williams. He carries himself with the swagger of an alpha dog, but he’s never made his teammates better and couldn’t fill seats in Atlanta. Johnson will never make sense to me, especially after leaving the Phoenix Suns, a team that was on the brink of revolutionizing the NBA with a progressive offense. He ended up being the cog in the system that they were never able to replace. Had he stayed, Steve Nash would have continued to pad Johnson’s offensive stats. He’ll always just be one of those guys who preyed upon middling franchises that felt pressure to offer B-list guys max contracts to make it seem like management was ‘trying to win NOW.’ Why is Johnson even reuniting with a world-class point guard when he wanted to do it himself all along?

It’s impossible to know what these guys are thinking, which is why Dwight Howard truly is the Brooklyn Net who got away. It was his destiny to end up playing alongside the NBA’s other non-substantive, alleged superstars. Had they united, after multiple seasons of playoff disappointments, all three ‘stars’ could claim a lack of help despite understanding the salary cap ramifications of a Big Three–style architecture. Now, the two guards will blame a lack of interior offense and defense.

Failure to Sculpt a Winning Team With General Manager Artistry

Fans subconsciously want to watch their team grow up so that they feel like proud parents when their team finally achieves something. The Nets didn’t view ‘building through the draft’ as a viable option, mainly because of the pressure they were under to launch in Brooklyn with a contender. They weren’t afraid to compound that problem by giving away draft picks.

It was probably realistic — most teams can’t find a franchise guy without the top pick in a rich draft. Instead, the Nets made it clear that they were willing to spend to add the most value to the team. Unfortunately, this meant that the Nets spent the past two seasons as the most literal group of assets that any professional franchise has presented to their few remaining fans. Sure, every team in the NBA is just a collection of assets, but it’s usually nice of the team to at least pretend that they’re trying to win.

Nets general manager Billy King is being praised for salvaging Williams’s career as a Net by acquiring Johnson from the Hawks a few days before the team’s pitch to keep Deron from becoming a Dallas Maverick. They locked up Brook Lopez with a max contract after Howard fell through. Recently acquired Gerald Wallace is going to make $40 million for four years, above market value. They’ll continue to fill the roster with more affordable players.

So what? King signed a bunch of guys to contracts. It doesn’t feel like he ‘saved’ anything. There isn’t really any artistry in his management, it was just a process of striking out. No LeBron James, no Carmelo Anthony, and no Dwight Howard. It wasn’t a matter of finding the players who actually believed in the Brooklyn dream. It was about finding trade partners that were willing to accept a pupu platter in exchange for their overpriced assets.

Failure to Incubate a Winning Culture

‘Building an entirely new culture’ used to be a hot sports term that made it sound like you understood that there was something ‘beyond the game’ that had to be altered within a franchise to make it a winner. Now, basically everyone mentions that modern cliché when they talk about a team that is trying to not suck anymore. There is a new wave of coaches and GMs who probably got jobs just by mentioning a desire to ‘change the culture,’ as if they were writing an essay to secure an MBA from the University of Phoenix.

The Nets aren’t incubating anything. There are no draft picks. There are no young guys to mentor. The team’s stars have already forged their identities. There aren’t even really respected veterans who run mentorship programs and will serve as the team’s ‘adult’ presence. The only thing the Nets have going for them is that they are no longer just a collection of assets on hold for the purpose of trying to obtain a superstar player.

It doesn’t seem like they are going to have a special corporate or team culture, since the Nets’ business model is all about exploiting rich New Yorkers with the illusion of a V.I.P. experience.

Williams was already ‘above’ the concept of small-market culture when he got Jerry Sloan fired, then requested a trade to a losing team that he could theoretically ‘control.’ The Jazz decided to ship Deron out as soon as possible, instead of letting it turn into a holdup, looking to rebuild as soon as possible, looking to reassert management’s control over the culture of the team. Now, Deron can try to win a championship under the guidance of Avery Johnson’s culture of winning as opposed to Sloan’s.

There might not be a proper business case for launching a professional sports franchise in a highly competitive market, and perhaps the Brooklyn Nets did everything they did the only way possible. Not every team can be the Little Incubation Project That Could, better known as the Oklahoma City Thunder. The Nets don’t have time to be a version of the Vancouver Grizzlies that happen to play in a market with actual performance demands. The relaunch of the Nets exposes the idea of a ‘winning team culture’ as effective only for small markets in which locals need the illusion of togetherness and overcoming long odds, which often result from a series of lucky bounces and prudent managerial decisions.

The intangible value of being a large-market team requires building a culture of stardom, the secret ingredient that feeds the egos of players who ‘want to play on the biggest stage possible.’ When the Nets have hard times, we’ll talk about it. When they are doing well, we’ll get overexcited about it. Best-case scenario, Adam Morrison will make the team after dominating the Summer League, leapfrogging his two superstars and leading to a Morrisanity phenomenon that will overtake New York. His underdog story will serve as the inspiration that guides the Nets to their eventual playoff exit.