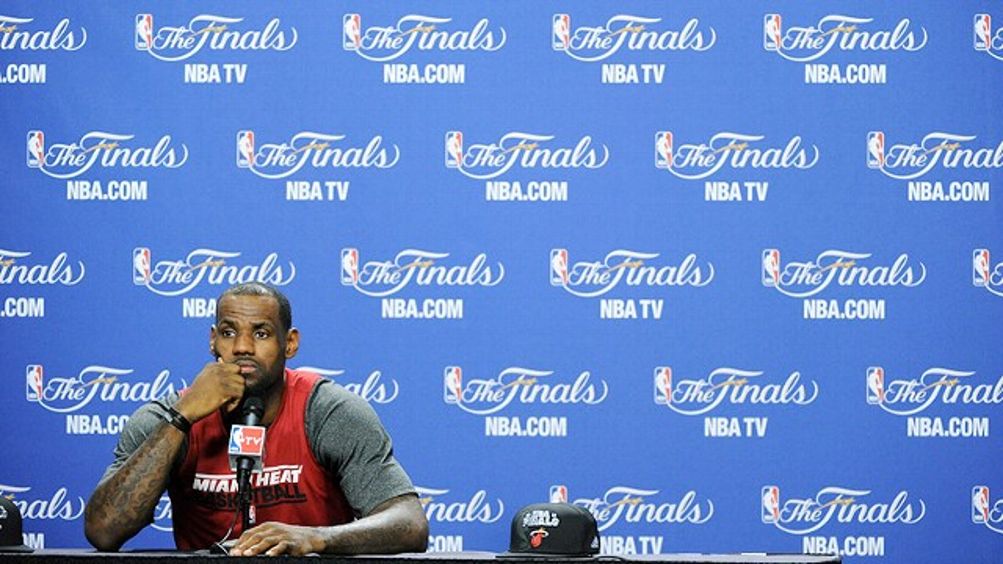 The world will be a better place when LeBron James can be universally accepted as ‘great.’

For the past two years, the sportosphere has been focused on the fallacy of deconstructing greatness. Although daily arguments over behavior in late-game situations and historical placement are part of the natural sports discourse, the NBA fan has been stuck in an unhealthy, argumentative state. We are more interested in analyzing individual body language than in deconstructing a team’s pick-and-roll defense. Now that the Miami Heat have seized control of the NBA Finals, we are mentally preparing for a world where LeBron has officially earned his place in the discussion of greatness. All of our arguments are about to become irrelevant, exposing the flawed template we used to construct our anti-LeBron values.

The moments after LeBron wins a championship will probably be the only time in his career when we are able to see an unplanned, unfiltered version of the real LeBron James. Hopefully Mike Breen isn’t mysteriously replaced with Jim Gray at the trophy presentation.

It’s time for us to rise above the norms of our hater-enabling society. Rooting for the Heat means rooting for a healthier NBA experience, sort of like how Obama was a symbol of ‘#hope’ for a better America. We will no longer use words to deconstruct our villain, but instead allow him to begin a new era of appreciation. LeBron James hoisting the Larry O’Brien Championship Trophy will end the chapter on the awkward transitional phase where he couldn’t seize his league. It wasn’t really even our dedicated arguments that prevented him from winning a title, it was probably the elevated and extended functionality of veterans like Kobe Bryant, Kevin Garnett, and Jason Kidd making it more difficult for him to seize a title.

Professional athletes have learned to say that the forces of media-crafted public perception do not penetrate their psyche. However, it would be impossible to ignore the snowballing post-‘Decision’ effect on LeBron James and the Miami Heat as they have transitioned into being the NBA’s universally accepted villains. We tune in to root against them, hoping to catch the most blatant choke because it will provide the negative reinforcement we need that prevents us from visualizing them as champions. Even I’ll admit that watching LeBron James dominate the 2012 NBA playoffs started out as pretty annoying, but that’s because I have only really been watching with the intent to discredit his contribution to his team’s performance and his historical legacy.

LeBron is no longer just a basketball player or even a ‘larger-than-life personal brand that was created to sell shoes to international markets’ that some players were fortunate enough to be in the late 1990s. He’s turned into a grudge that is so old we have forgotten why we are so passionate about perpetuating the hatred. Whether it is a regular-season game against the Bobcats or a Game 7 against the Celtics, we are programmed to tune in as if we are gathering evidence for a case against ‘greatness.’ What are we even protecting by not wanting LeBron to be considered ‘great’? Probably just a defense mechanism for the NBA memories of our youth. I wonder if anyone wishes they could go back in time and root against Karl Malone, Charles Barkley, and Gary Payton.

For the first time in his career, I feel empathetic while watching LeBron James because he is playing with the vulnerability of someone who has been excessively cyberbullied. I usually hate watching the Heat, but LeBron has finally shown us that he is tired, drained, and on the brink of a complete physical breakdown. Despite all that, he is playing with the urgency of someone who understands the cost of leaving another Finals without a championship.

It’s weird to be rooting for the Heat, because they are actually one of the most annoying basketball teams to watch, especially after the alleged purity of the Spurs-Thunder series. The Heat have a way of making basketball seem ‘less basketball-y.’ In Wade and James, they have two unstoppable forces who charge down the lane and shift the focus to the officials’ whistles. The Heat are not a team associated with great ball movement and finding the open man, creating a new iteration of the ‘beautiful game’ that can be celebrated by disciples of James Naismith. They are most likely to inspire conspiracy theories. It’s a surprise when one of their role players scores more than 10 points.

It doesn’t feel like we’re watching greatness, but rather that we’re seeing two of the most difficult players to officiate playing on the same team, wearing down the Thunder defense. Every time the Thunder angrily look at the officials for a missed call, you can just feel Pat Riley smiling from his seat. He found a legal way to put pressure on the current iteration of the NBA rulebook.

When LeBron first signed with the Heat, we were threatened by how NBA teams would be assembled in the future. We thought that ‘superstars’ would begin to team up and ‘ruin’ the competitive balance of the league. Now we’re in a Finals that consists of two teams with similar makeups: two legitimate workhorses and a group of inconsistent role players. As the series has played out, it feels like the same old NBA because we’re still watching a team that has ‘been there before’ make ‘championship hustle plays’ and another one fail to find their game on the biggest stage. Or maybe we should give the Heat credit for ‘championship-level defense.’

The outcome so far feels a little bit obvious, even though we are supposed to be watching the highest level of basketball we’ve seen played all year. But the Finals are just a basketball showcase for casual fans. With so many off days between games, the pace of the series can leave the focus on everything but basketball. It’s not about the game, it’s about milking every last moment of our theatrical analysis system before the season terminates. To the hyperfan, LeBron James is the face of those people who are only casually interested in basketball.

Unless you have a rooting interest in a team, the analysis between games wears at your soul, and ultimately just gives you a chance to reflect on some of the more annoying elements of sports that are catering to the people who haven’t been there all season long. It has become too easy to get sucked into deconstructing ‘unearned greatness’ since it is the most snackable angle for the casual fan. Obsessing over media coverage strategies is pointless since the people who are hyper-aware enough to complain about them probably aren’t in the target market of the coverage that they are watching.

Sure, even if LeBron wins, new angles will emerge. But we’ll never see alleged greatness incubated in this way again. He was the first high-schooler we watched on TV. One of the last high school stars drafted. Hopefully the last guy with an inner circle that would enable a ‘Decision’-like event. A member of the last generation of superstars who thought they had to decide between ‘small’ and ‘big’ market opportunities.

Rooting for the Heat means rooting for a tonal change in sports media. I feel like maybe we’ve already learned how to be more mature in these Finals. We’ve already cut Russell Westbrook some slack instead of hyper-critiquing his NBA existence. He’s probably fortunate to have come along in the new era of individual forgiveness, where we learn to take a step back and take a look at the big picture before we are lost in the sensationalist hatred and fallacy.

After rooting for epic failure for so long, it’s refreshing to remember that the human spirit feels the most fulfilled when celebrating a redemption story. Or maybe we’re just about to watch the most fulfilling choke in sports history.