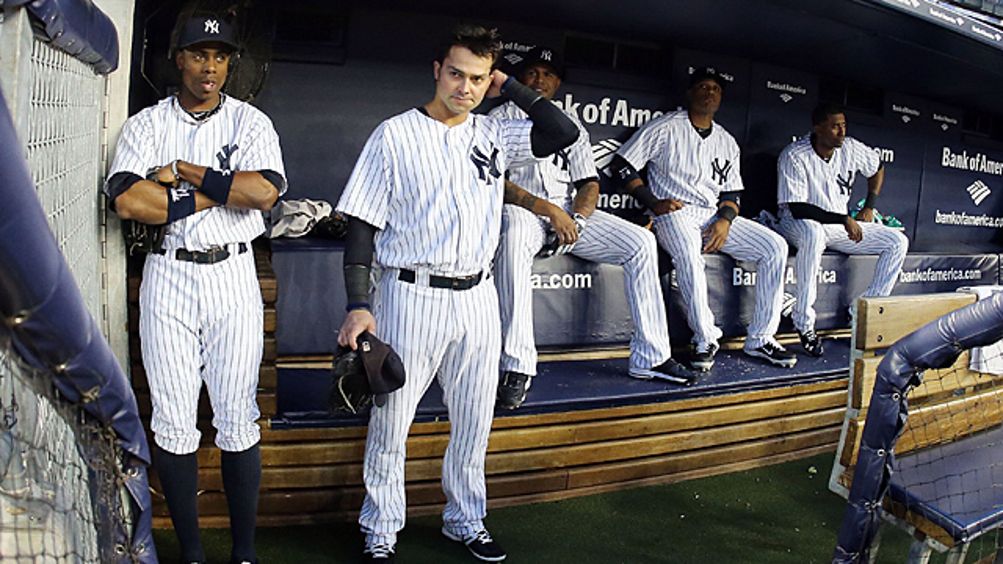 Some things, at least, never change. On Saturday afternoon, the D train uptown was alive with New York’s entrepreneurial spirit. A little short of 125th Street, a couple of kids came on, selling Fruit Roll-Ups out of a box of dubious provenance. They said they were raising money for a project somehow connected with the Parish of Saint Somebody, the saint’s blessed name being lost in the rattle of the train. I bought one on the off chance that the saint might be an influential one and that I might need all the help I can get. When the snackmongers hopped off, they were replaced by a spirited three-man conjunto, who picked guitars and wrung melodies out of an accordion and generally kept us entertained for three stops or so. At that point, the musicians smilingly walked the length of the car, their hats in their hands, and were paid accordingly. Unfortunately, one of the guitarists was a bit slow afoot and, when the other two exited, he got marooned on the train. He soldiered on, going into business for himself, soloing along and passing around his own hat, as we moved on to the next stop. Getting to Yankee Stadium in New York is not like getting to the ballpark anywhere else. Once you get there, though, the first thing that catches your eye is a Hard Rock Cafe — a franchise that, I will bet you a shiny buffalo nickel, the Curiosity rover is going to find on Mars. Right next to a Banana Republic and a Chipotle.

Now, let me be clear. I like malls. In fact, when I’m on the road, I spend an inordinate amount of time in malls. They are something of a touch of home. (Future historians are going to marvel at how, all at once, the entire human race decided to eat nothing but bourbon chicken.) But, while I don’t necessarily mind malls everywhere, I don’t think everything has to be a mall. And that is exactly what the “new” Yankee Stadium is, and I don’t care how much latticework they hung from the upper deck. It’s a mall.

Now, I was not a big fan of the old ballpark, either, but at least the history that got tossed in your face at every opportunity was honestly come by. Now, though, this being my first trip to the new place, it all seems … commodified. And it starts right when you get off the train, in Babe Ruth Plaza, the wide expanse of open space that stretches out into the middle of 161st Street. One thing I do remember about the old place was that the Bronx enfolded the ballpark within itself. There were souvenir shops, and diners, and dark bars in which thousands of Rheingolds and Schaefers and Knickerbockers had been hoisted in honor of everything that had happened just down the block. Most of them are still there, some under different names, but the broad concrete pasture in front of the new ballpark makes them all seem so very far away. The history doesn’t seem to extend outside the stadium anymore. It is all contained, in the shops within the ballpark, inside the mall. This is both more and less than a ballpark. It is also an aquarium for rich people.

I began to put a lot of this together on Sunday afternoon, while the Yankees were playing the Tampa Bay Rays in the third game of a series. The Yankees had been staggering for a stretch, and had fallen into a tie with the Baltimore Orioles, who, of course, are managed by Buck Showalter, one of the last managers pushed out by George Steinbrenner, who glowers in from a billboard in center field that makes him look for all the world like a movie that’s coming out this Christmas. They needed at least two out of three from the Rays who, if they have proven nothing else over the past few years, have proven that they know how to play when the shadows lengthen in the fall. New York got the Saturday game, 5-3, behind a strong performance from a young pitcher named Ivan Nova, about whom more anon. Now, it was the third inning on Sunday, and the Yankees were in the process of making Matt Moore of the Rays come totally unstrung. The Yankees had slapped and bunted and stolen their way to a 2-0 lead, and Moore had thrown one to the backstop to put himself in a hole with two men on and nobody out.

(It should be noted that, about halfway through these extended exercises, Nick Swisher, of all people, bunted Derek Jeter along, and then Alex Rodriguez stole a base. “We put some small ball together with some Bronx ball,” Swisher said later. “You like that one, dude?”)

Moore then left too much of a low fastball over the outside corner to Russell Martin, and the Yankees catcher carved it into the right-field stands for a 5-0 lead. At this point, Moore looked as though he’d rather have been playing the accordion for strangers on a train. A little later, he sent a pitch sailing over the head of Curtis Granderson, and you could feel the ballpark tense up. (There was no possible way Moore did this deliberately. He’d just completely gone to the zoo at that point and was as likely to have hit the ballpark organist as he was to hit Granderson.) Home plate umpire Paul Emmel warned both dugouts and Tampa manager Joe Maddon took loud exception. This prompted Emmel to run Maddon, who then came out to speak his piece, as managers have done since Miller Huggins was raising hell in this general neighborhood.

It was then that I noticed that the cops had come out to ring the field, and it struck me that what we have done in our modern homogenized era, when we have handed our sports entirely over to television, that great murderer of spontaneity, is that we have created a demand for a television experience even at the ballpark itself, with commercials and public service announcements and nothing at all that will surprise us ever again.

When did that happen? I wondered. When did we need police protection from a run-of-the-mill ballgame rhubarb? When did we start playing our games in gated communities? 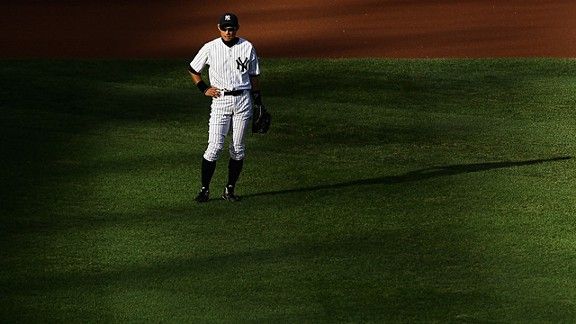 If the Yankees rally and do anything in the postseason, when the game really becomes a serious television extravaganza, you might be able to point to this weekend as to when the season really righted itself. It had been building for a while. Injured players — including Saturday’s hero, Nova — are beginning to come back to the lineup. (Andy Pettitte and Brett Gardner are also expected back soon.) All season, the team had looked like the Island of Misfit Cleanup Hitters, a bunch of guys — Eric Chavez? Raul Ibanez? — who’d been big noises elsewhere, but who were manifestly out of place as the spare parts they obviously are in New York. (Part of this has to do with a Yankees farm system gone ragged.) The team had a weird, patchwork personality this year, and only the collapse of every other team in the American League East except Baltimore — most notably, the transformation of the Boston Red Sox into Mystery Zombie Theater — kept New York from serious trouble throughout most of August. But, over the weekend, in his first start since coming off the DL, Nova appeared to solidify their pitching and then, on Sunday, in the process of driving poor Matt Moore around the bend, the Yankees showed a real gift for manufacturing runs on the basepaths.

“I call it small ball. Everybody just wants to call bunting small ball, but it’s a number of elements from which you can create runs,” said New York manager Joe Girardi. “Sometimes, when you can get to third with a walk, and then you steal a couple of bases, well, it helps. When you look at our club, before we got Ichiro [Suzuki] and [Eduardo Nunez], we had a bunch of guys who were used to hitting third and fourth in the lineup, and that haven’t been asked to bunt for years, haven’t stolen bases for years. When you’re hitting third, fourth, and fifth, you’re not stealing a lot of bases. We didn’t have those kind of players, and Ichiro isn’t the kind of guy who’s run a lot in his career, either. We’ve asked him to do a little bit. I think with the addition of those couple of guys, and the addition of a few guys we’ve been able to add to our roster, we can do more things and create runs, and I think that’s important. But I still don’t think I’m going to ask Robbie Cano to bunt. I’m not going to ask Alex to bunt. Those guys are expected to drive the runs in.”

On Sunday, Nunez, who has had to step in at shortstop for Jeter, whose injured ankle has him noticeably laboring, was in the center of the scramble that created the sixth Yankees run in a 6-4 final. In the fourth inning, with Moore finally dispatched to a quiet room somewhere, Nunez reached on an error by Moore’s replacement, Brandon Gomes. He then proceeded to steal second, and then third, which put him in position to score on a deep sacrifice fly by Rodriguez. “The pitcher, they know I can steal the base,” Nunez said. “The opportunity is there, I’m going to take it and then, maybe, the hitter has a better chance to get a base hit.”

The day before, Suzuki did pretty much the same thing to produce a run that became more vital as the game went along. With Nova sailing along, Ichiro came to bat in the fifth inning with the Yankees leading 3-0. He singled, stole second, and then scored when Jeter ripped a pitch up the middle. New York hung on to get Nova the win. “He came up with a great start,” Girardi said. “What he does, when he pitches like that, he allows us to lengthen our bullpen.” After Saturday’s game, and fresh off the disabled list, having struck out eight in only six innings, Nova looked like a man who’d finally come up for air.

“I’m not one of those guys who sits in the corner, you know, and that’s how they focus,” he said. “I like to laugh and to joke around and I can focus that way, you know? You have to know when it’s time to go to work, and then you go out and you do the work, and then you can come back in here and joke around some more. You just have to know when it’s time to play ball.”

Slowly, and at the right time of year, the New York Yankees seem to be fashioning a complete personality for themselves, and a coherent internal narrative for their season, and both of them seem to be more authentic than the strange place in the world where the team has found itself placed, in the middle of a wholly created zone of 21st-century Mammon that seems to have been dropped in from another planet, a distant world beyond pawn shops and diners and Knickerbocker beer.