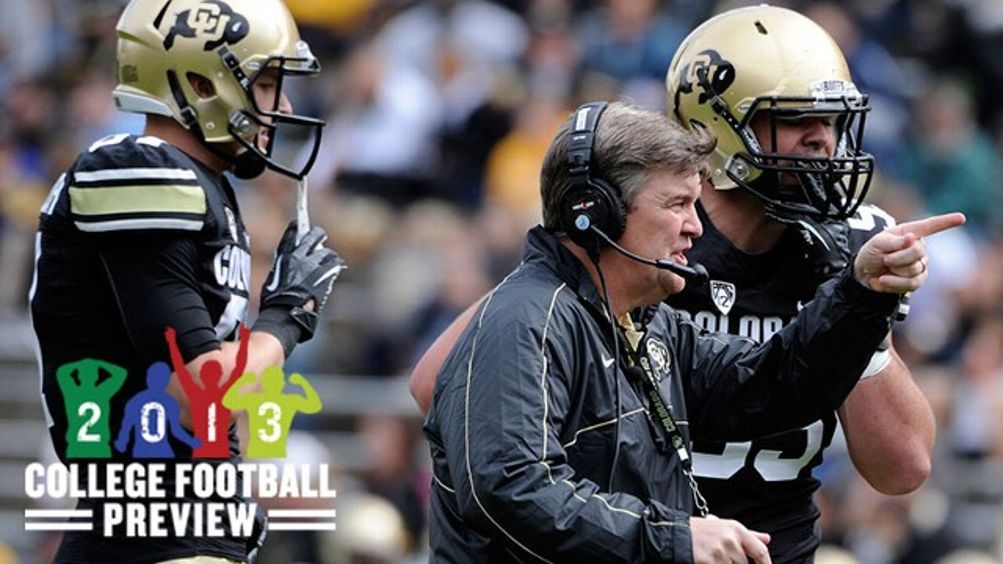 “I’ll tell you a terrifying schedule,” says Mike MacIntyre, who’s taking over a Colorado team that went 1-11 last season and will face seven 2012 bowl teams this season. “At San Jose State? We opened up with Alabama. They’d just won the national championship. Then we went to Wisconsin. Then we played Southern Utah, and their quarterback that we played against got drafted this year.1 Then the next week we played Utah, who had gone [10-3] the year before. Then … we played Nevada. Then the next week we played Boise State. And we only had 75 scholarships, because we were on APR probation.”2

MacIntyre thinks he can win at Colorado, because he won at San Jose State. Nay, went 11-2 at San Jose State. This is not an unreasonable line of thinking for a coach well used to doing more with less. He likes to tell a story from his early days with the Spartans, when he discovered the team had no money allotted in its annual budget for recruiting in May. “The first time I met with the president of the quarterback club, after I was there a week, he goes, ‘What can I do for you?’ And I said, ‘You can raise me $25,000 so I can send our staff out this May.’ He goes, ‘What?‘ But he got it raised, and we went out recruiting every May, and it made all the difference in the world.”

All the difference in the world would be a nice start in Boulder, where the Buffaloes recorded a 4-21 record over the last two seasons, fired the head coach who gave them that record just two years into his tenure, have seen very recent turnover at the athletic director position and a request for a sizable budget cut, and haven’t finished above .500 since 2005.

Where do you even begin, preparing kids for action when some are operating under the third head coach of their short collegiate careers? In MacIntyre’s case, he starts with the fact that he’s been there too. “I’ve played for three different head coaches. So I’ve been in their shoes. I played defensive back and I had four different defensive back coaches. So I know how they feel. We try to include everyone in every way we can, in every situation, not try to isolate anybody whether they were recruited by us or another coach, or another coach.

“Because I think kids really listen to that. They kinda have their ears perked up. Is he really counting on me? I’m not one of his — that means nothing to me. I’m going to play the best players, the most committed guys. Period. And I think, when they realize we’re trying to do that, that we earn trust with those young men.”

Once he has that trust, of course, there’s the task of bucking them up for a few more months of underdog play. “David Cutcliffe gave me a saying,” said MacIntyre, “when I first was coaching for him at Ole Miss. No excuses, no regrets. And that’s huge for me. When you go to a smaller school, you get a lot of excuses, a lot of ‘We’ve never done it like that before,’ ‘We don’t have the money for that.’ And I always said, ‘No excuses, no regrets.’ We’re gonna find a way to do it, the correct way, and then you’ve got to kinda put on blinders and coach.”

Blinders might actually be really useful in Boulder about now. It’s one thing to coach San Jose State out of the bottom of a well. It’s going to be quite another to accomplish the same thing in a major conference, particularly one like the Pac-12, where two teams won BCS bowls last season and several other higher-profile programs are undergoing revitalization efforts of their own.

“We know the schedule’s a good schedule,” said MacIntyre, “and that’s what these young men expect to play in, and that’s what I expect to coach in. We know we’re big boys and that’s one of the reasons you coach in the Pac-12. To play in big games every week.” They’ll certainly get their wish. The 2013 conference slate includes visits from Oregon, Arizona, and USC, and trips to Oregon State, Arizona State, and UCLA. The Buffs will do well to even be favored in one regular-season contest. No matter. MacIntyre is used to this sort of thing.

“I think that it’s kind of invigorating,” he said, “when nobody gives you a chance, but you’d like to get out of that role, like we did at San Jose State, and be on the other side of it. That’s also fun. You’ve heard it a lot before, but I think a lot of it is in the journey. Enjoy the journey. Colorado has been to the very top before. So I think we can definitely do that again. History is so big here, but at the same time, these young men need to build their own legacies.”

New legacies are attainable, with time, resources, and some luck. In the meantime, just never doing this again would be a great start.

• Scenerywise, not a hard sell. MacIntyre’s daughter, a rising senior at Baylor, found out he’d been hired at Colorado from players on Baylor’s football team. “As soon as it came across the wire, she’s walking to her next class, and players were coming up to her going, ‘That’s our favorite place to play when they were in the Big 12! We love that view! We love that stadium!’ And she goes ‘What?’ She hadn’t seen it yet.” 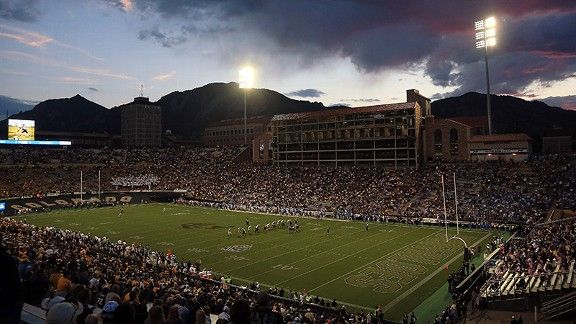 • Colorado quarterbacks: This End Up. Colorado has had something of a tumultuous offseason at the quarterback position, losing Jordan Webb to a knee injury, Nick Hirschman to a transfer, and Shane Dillon to basketball. Are the remaining candidates being stored in a museum vault? Are they well padded at all times? “We have ’em all sleeping in bubble wrap.”

@Phyltopia @adamcm777 depends how long the race is…….lol….I’ve lost a step in the past few years so Ralphie

With sincere apologies, we may have to amend our earlier statement and call the Oregon Duck the best plush mascot. The best live one is undoubtedly Ralphie the Buffalo. The reasons for this are simple, and listed here:

• Is a live buffalo.

• Is from time to time loosed on the field. (Not during a play. Yet. We can hope.)

• Every once in a while will break loose from her handlers:

• Mandatory viewing: Bill Connelly about has it pegged when he says Colorado has about five winnable games this season, and up to 12 losable ones. After the Week 1 rivalry date with the Rams, who beat the Buffs but went 4-8 themselves in 2012, Colorado gets a visit from Central Arkansas before its first contest with a quality football team, in the form of Fresno State on Saturday, September 14.