The Commissioner After the Lockout 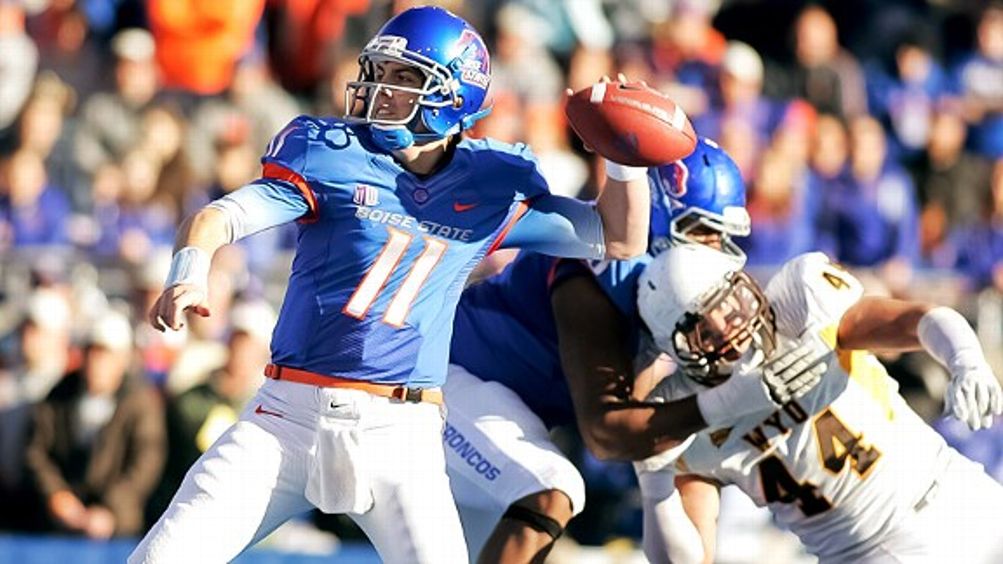 On New Year’s night in 2007, I watched the greatest college football game of the aughts and did something incredibly stupid: I fell hard for all that hopey-changey stuff. When Boise State tied the Fiesta Bowl against Oklahoma on an illogical last-minute hook-and-lateral and then won in overtime on the only skillful post-Eisenhower era Statue of Liberty executed outside of a Sheboygan backyard, I allowed myself to believe. I suddenly had faith that the entrenched interests would be supplanted, and that college football would emerge into a modern era undefined by classism and cartel behavior. I watched Boise State running back Ian Johnson take a knee and propose to his cheerleader girlfriend, and I imagined that someday soon, all would be right with the world, and an eight-team playoff would salve our nation’s wounds.

And now five years later, here we are again, at the climax of a season in which no one can settle on a damned thing except that the system continually manages to bugger itself in newfangled and convoluted ways. The final weekend of the regular season is upon us, a Saturday adorned with newly minted conference championship games and Bedlam rivalries, and it is all completely meaningless, because the BCS Championship Game has been predetermined, because we are now almost certain to be force-fed a rematch between two teams, LSU and Alabama, who play in the same division of the same conference and have already met once this season. And anyone who presents a contrary argument does it with a sense of resignation, because there is no fighting the men in command, the Boss Tweeds who draw fat checks from the Fiesta Bowl for playing 36 holes at Cypress Point every three months.

Well, pardon my Corso-ese, but fuck that. What follows may not be entirely rational, but it’s been mere weeks since my childhood allegiances melted down altogether in the midst of the most horrifying scandal in the history of college sports, so forgive me if I’m not in the mood for an argument based on the whims of some retired tax auditor and an Intel Pentium chip. I think we’re getting this all wrong. Alabama and LSU may be, by technical definition, the two best teams in the country, but that shouldn’t mean anything at this point, and not just because we’ve seen that movie already and it looked a lot like the first hour of The Tree of Life. The only thing that matters is that the system needs to be challenged by any means possible, which is why those of us with a conscience should be agitating for one team, and only one team, to play LSU for the national championship. And that team is not coached by Nick Saban, and it is not financed by T. Boone Pickens or Phil Knight, and it is not quarterbacked by the heirs apparent to Peyton Manning or Andre Ware, and it is far too good for the ACC.

I am speaking, of course, of the team that afforded me hope in the first place. I am speaking of Boise State.

I was drowning my sorrows in a fabulous Chinese restaurant called the Golden Wok when I heard that Boise State lost to TCU. It was the first weekend of the post-Paterno era, and I was having trouble justifying thoughts about football at all, and I thought maybe I was on a hard-core MSG trip, and then I checked my phone and realized that I wasn’t. In retrospect, I shouldn’t have been shocked. In retrospect, this loss was inevitable. The Broncos have spent the past two years walking such a thin tightrope of anticipated perfection that it seemed inevitable they’d fall on their faces again.

I would argue several things about Boise — including that Chris Petersen is the most gifted coach in America and Kellen Moore has as much potential to be the next Drew Brees as Drew Brees once did — but I would argue most of all that the Broncos have it just as hard as Alabama or Oklahoma State do, because all they can do is fail. In each of the past four seasons, they’ve spent every day trying to avoid that thought, because the system permits them nothing else. The Broncos lost on an errant field goal to a Horned Frogs team that is BCS-worthy, and yet even if that field goal attempt had gone through the uprights, there is a very, very good chance that they would have been shut out of the national championship game anyway. They had to know that. When I spoke to one Broncos player after their season-opening shellacking of Georgia, he told me that they really only worried about the things they could control, and I didn’t believe him at all. The Broncos understood they were damned if they did, and damned if they didn’t. That’s why in this Post-Hope era, they are the only choice that makes sense, the only choice that truly speaks to the establishment’s hypocrisy. And in an age of institutional mistrust, aren’t these the moments we’re all in search of?

There are a number of methods for disputing this argument, and I’m sure you will make me aware of all of them, because nothing fans the flames of arbitrary snobbery quite like the BCS system does. Boise State lost a football game, you will say, which may hold a great deal more weight if every other college football team, save LSU and Houston, had not lost a game as well.1 Well, Boise does not play the same grueling schedule as everyone else, you will say, and I might afford this more weight if (a) Boise had not manhandled one of the SEC’s championship game participants in what was essentially a road game, and (b) Boise’s opponents’ win percentage had not actually exceeded that of both Alabama and Oklahoma State. Did you know that in the month of October, Alabama didn’t play a single team that finished the season with a winning record? Well, it didn’t,2 and if you don’t count FCS teams, it played only four all season. Did you know that Oklahoma State lost a game to a team that may not finish with a winning record at all, which was in fact a far worse loss than the one Boise suffered? Well, it did. And yet these arguments don’t hold the same weight, because Boise is still Boise, and Boise plays Wyoming and UNLV, and Boise must be absolutely spit-shined and spotless in order for us to consider it at all. Five years after the Broncos accomplished the impossible, and then beat TCU in the Fiesta Bowl in 2010, nobody believes they could possibly deserve it for real this time. There is no such thing as success for the Broncos. All they can do is fail. That blue turf should be adorned with Schopenhauer quotes.

I’m not going to lie: I want Boise to play LSU because I want to believe in something this bowl season. This is the year college football broke my soul, and I’m trying to find a way to piece it back together. And so I truly believe that a Chris Petersen-coached team, given a month to prepare, would give LSU a hell of a game, and might even have the best chance among the BCS top seven of actually winning. Maybe I’m being overly idealistic, but I don’t care. I’m in the mood to fall in love with the impossible again.

Previously from Michael Weinreb:
Living in State College
The Culture of Unrest at Penn State
Growing Up Penn State
The Real Rocky
Who Invented the Seven-Game Series?
The Best Passing Quarterback Everxx
The Saturday Agenda