‘Getting Ready for a Car Crash’: An Interview With Triple H 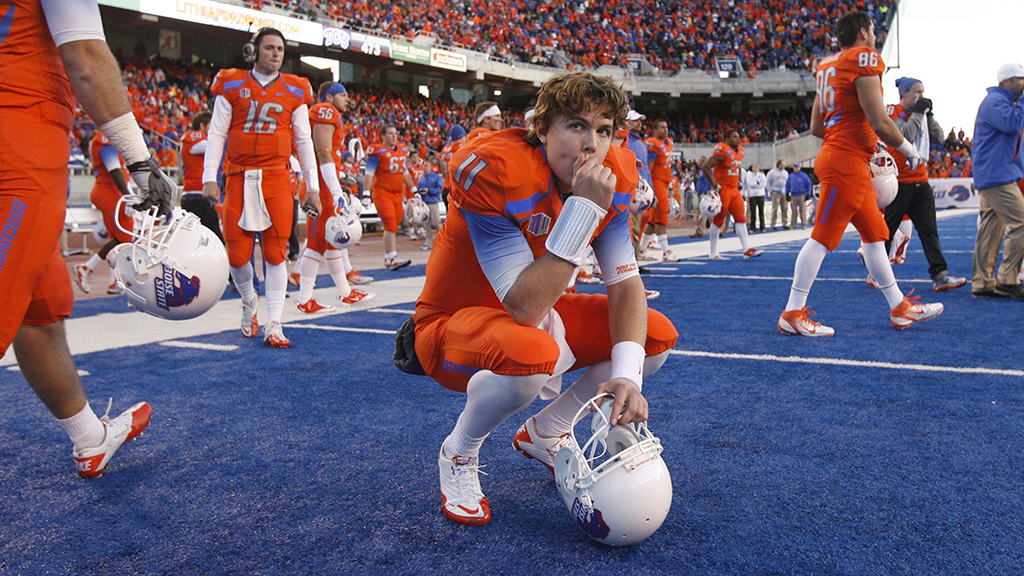 Here’s a pleasurable thing to do: Cue up this video, run it through to about seven seconds, and then freeze the frame.

At that point, you can see what’s coming, and you can also witness the forces of nature driving things toward their inevitable conclusion. You can view the constellation of Oklahoma defenders careering toward the top of the screen, trying desperately to battle physics and veer back in the other direction. You can see that one Boise State receiver has just caught a short pass on fourth-and-18 with under 10 seconds left in the game, which makes no rational sense, but you can also see the other receiver hooking around precisely five yards behind him in the opposite direction. You can observe the whole thing fixed right there in front of you, and even if you’ve watched it a dozen times, like I have, you can still say to yourself, “They aren’t really going to make this work, are they?” It is a beautiful stop-motion, like one of those great Sports Illustrated photos of some iconic play chronicled in midstream.

Now go ahead and watch the entire video. Eighty-one seconds, no broadcasters, just raw footage of inventive trick plays that took place over the course of maybe 40 minutes on New Year’s night in 2007, at the Fiesta Bowl. The hook-and-lateral, the halfback toss, the Statue of Liberty: all of them in desperate situations, do-or-die, the upset of the century on the line.

Take in those 81 seconds — the tension, the shock, the joy, the absurdity — and tell me you wouldn’t want to see something like that happen again.

In 2011, Alabama played LSU in college football’s most recent iteration of a Game of the Century, and what resulted was a throwback to the Games of the Century past, a fierce and frustrating defensive slog that wound up resolving nothing. Two Southeastern Conference teams, both undefeated, on a November night in Tuscaloosa; it was the highest-rated non-bowl telecast on CBS in more than 20 years, and it was resolved on a botched trick play and a game-winning punt. The final score was 9-6, and in the end, it didn’t even matter who had the 9 and who had the 6. A couple of months later, Alabama and LSU would play each other again, this time with the national championship on the line, because what could be more fascinating than a rematch of a game that didn’t manage to capture anyone’s imagination the first time around?

College Football Games of the Century

“The problem is that pairing the 2 best teams in a matchup is not as important, in my opinion, as producing the fairest matchup,” wrote revisionist poll historian James Vautravers, “which (in 2011) would and should have been LSU-Oklahoma State.1 What we got instead was a relatively closed system.”

But this is the thing about college football: I’m not sure anyone with any clout really wants a fully open system.

I mean, I suppose 2011 showed we’d made some moderate advancements in the 65 years since Army and Notre Dame slugged it out to a 0-0 tie in the first of the postwar Games of the Century, proving to a sleepy Yankee Stadium crowd that no sport dodges resolution and foments the capital-A Argument quite like this one. I suppose we can at least say that, unlike in ’46, there was a national championship game, even if it might have involved a rematch we didn’t want or deserve. And I suppose we can say the best team, in an empirical sense — which turned out to be Alabama after all2 — won the national championship in the rematch, even if the best team probably didn’t deserve to be there in the first place.

And I suppose we should be happy that all this obfuscation and all these years of unresolvable arguments have finally culminated in an impending four-team playoff. And I suppose, in the end, instead of dwelling on the foibles of the past, we should end this series with the question we have to ask ourselves moving forward, which is whether we care more about rewarding the best teams or indulging our sense of possibility.

College football has never been very kind to the underdog, and I imagine some of this has to do with the fact that it is, and has always been, an oligarchy.3 The entrenched powers never want to give ground, and this is why it took us 144 years of organized football to get around to the idea that a playoff might be a more equitable idea in the first place. In the early 20th century, Notre Dame was repeatedly turned away from the Big Ten for reasons that relate to both religious bias and good old-fashioned elitism. In 1916, Georgia Tech, searching for a way to validate its stature, mailed a letter to the once-proud Cumberland College football program, seeking a game with a $500 guarantee; three Cumberland players got lost at a train stop in Nashville on the way to the game, and the Yellow Jackets won 222-0.

And yet it still happens that every so often certain determined and enterprising coaches manage to elevate a wayward program into this insular universe. So it went with Miami under Howard Schnellenberger in the early 1980s; so it went with Urban Meyer (and subsequently Kyle Whittingham) and Utah in the early 2000s; and so it was with TCU (Gary Patterson) and Boise State (Chris Petersen) in the mid-to-late 2000s. All of these programs benefited from coaches who challenged the status quo, who opened up the playbook and devised new schemes and embraced unconventional thinking. And yet all of these successes engendered such irrational disregard from fans of entrenched programs — those who tend to be the loudest fans, anyway — that it almost seemed like a personal affront: It took us years to build this booster club pipeline, and you think you can just compete right away by inventing a new kind of defense?

I will admit, I’ve been guilty of this dismissiveness in my younger years; in 1982, when Penn State went 11-1 and SMU went 11-0-1, I would have been appalled if the Mustangs would have won the national championship. (In retrospect, SMU almost certainly had better talent; at the very least, the school paid top dollar for it.) I’m still not sure if BYU deserved to win the national title in 1984 after going undefeated while playing one of the weakest schedules in the country.4 I constantly wrestle with the question of whether a team should be penalized due to forces beyond its control. In no sport is this more relevant than in college football, where the schedule is often out of programs’ control, and where success depends on an athletic administration’s persuasiveness with poll voters as much as it does the actual results.

And yet Boise State is, and continues to remain, the peculiar little underdog that no one wants to acknowledge. 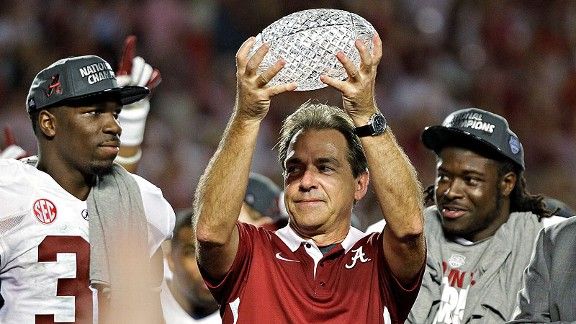 I‘ve said this before, and I’ll say it again: I’ve come to the conclusion that nothing Boise does, short of somehow sneaking into a power conference, will ever elevate it to a level that the general population considers “elite.”5 I think the fact that the Broncos won that 2007 Fiesta Bowl on that series of trick plays led people to assume that Chris Petersen’s entire repertoire is based on sleight of hand; I think people presume that a school from Idaho simply cannot possess a level of football acumen similar to a team from, say, Georgia;6 I think people look at Boise’s crushing defeats, on missed field goals, to (very good) conference opponents in 2010 and 2011, and presume this invalidates Petersen’s 84-8 record. I think people see a gimmicky program with gimmicky turfgrass engineers and a gimmicky coach that still plays in a gimmicky little conference because the best “real” conference they could get into was the Big East (which, like TCU, they backed out of before playing a game, after figuring the status quo in the Mountain West was preferable to the diffuse gathering of outcasts that now make up the American Athletic Conference).

At the same time, I also concur with the argument that, in 2011 — or in any other year — Alabama was objectively better than Boise State. I just wonder how relevant that argument should be in the grand scheme of the capital-A Argument.

Maybe, if you are the kind of fan who believes that the objective of any postseason tournament should be to determine the best team rather than the team that plays the best at any particular moment,7 you find those previous two sentences infuriating. Maybe you agree with what the otherwise cogent ESPN college basketball analyst Jay Bilas said recently: “Football isn’t based on Appalachian State beating Michigan a few years ago … Clearly people aren’t pining for the upset the way we think they are.”

I think this is indicative of a general divide. I think there are people, like Jay Bilas, who just kind of presume that no one really pines for upsets, because this is not the framework from which they emerged;8 and there are people like me, who do pine for the upset, who believe that upsets — or at least the constant and lingering possibility of an upset like Appalachian State over Michigan — are, in fact, the best thing about college sports. And this is what concerns me most, in a pure emotional sense, about a four-team college football playoff: That it will be monopolized by power conference teams. That all these “major” BCS conferences will break off into a new division, with each power conference receiving a bid in the new playoff system, thereby leaving the teams that are considered lesser lights to fend for themselves.

I realize that, on a practical level as it relates to NCAA reform, this might be a good thing. I realize that these decisions are driven by certain inevitable capitalistic factors like money, and money (and also money). And it’s possible that I’m overreacting: It’s possible that a four-team playoff could grow to eight teams more quickly than we think, and it’s possible that, as Petersen implies here, Boise may eventually be able to schedule home-and-home series against a higher echelon of teams because those teams will be looking to bolster their non-conference résumés to qualify for said playoff. But it really does seem like a watershed moment; there’s a possibility that Boise will be the last of its species, and I worry that if it is, we would omit something essential from the sport.

I recognize that it’s a crapshoot, all this allowance for wild possibility; I recognize that sometimes — probably even most of the time — you’re going to wind up with a Hawaii or a Northern Illinois, with a team that is worthy of the snobbish empirical judgment that has been bestowed upon it. And this tends to fuel the argument of the closed-system advocates. But sometimes it doesn’t work that way. Sometimes crazy shit happens, and hook-and-laterals actually come together like they do in practice, and the best team doesn’t win at all, and it’s bizarre and glorious and culminates in surprise marriage proposals straight out of a Frank Merriwell novel. It’s not that we’re pining for the upset; it’s that we’re pining for possibility. Because if there’s no more possibility, is there anything left to argue about?