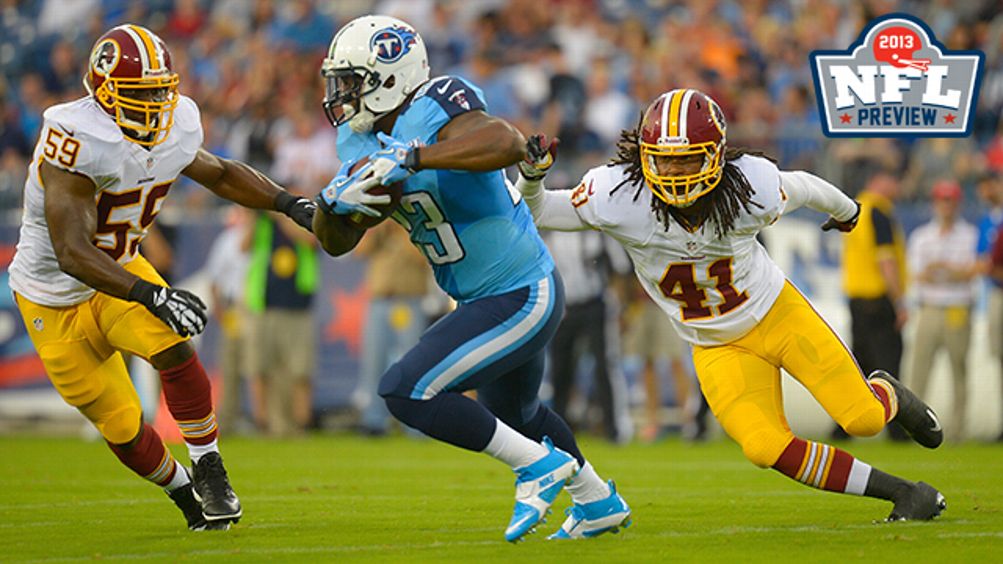 Sometimes, teams do things that don’t seem to make any sense. When I wrote about Chris Johnson last week, I mentioned that the Titans spent up to $10 million this offseason on Shonn Greene as a supplement to Johnson, their $30 million back. When you spend a ton of money on one back and don’t get what you’re hoping for, why not throw some more money at another back? In this case, the Titans paid Greene to serve as the short-yardage and goal-line back in a part-time role. It was a crazy move considering how the running back market was likely to play out, but that’s already obvious.

Instead, Greene’s arrival got me thinking about goal-line backs in general. Johnson is not considered a typical goal-line back because of his size: Listed at 5-foot-11 and 203 pounds, Johnson is no one’s idea of a bruiser. Greene is a more conventionally sized goal-line back; while he’s also 5-11, Greene packs on 20 more pounds than Johnson. But is that really a good thing? Are bigger backs really more effective at the goal line than smaller backs? What sort of player succeeds with the end zone just yards away?

Well, let’s see if history suggests anything. During my time at Football Outsiders, I built a model for testing effectiveness near the goal line that’s simple enough to apply. It estimates the likelihood that a back will score a touchdown given the down and distance to the goal line, given historical data on success rates inside the 5-yard line. I conducted that research several years ago, but since it’s now 2013, I’ve used the play index at Pro-Football-Reference.com to build new baselines for these likelihoods. In this case, I’m using the touchdown rates (not including first downs) for each relevant down and distance on plays in which a running back (not a quarterback or a player at any other position) carried the football.

Then, by considering the carries each player gets near the goal line, it’s simple to figure out an “expected” touchdown total if he scored as frequently as players around the league do in the same situations. A player who is particularly effective near the goal line will score more touchdowns than this baseline total, and one who isn’t will fail to do so.

Take that first line. On first down with one yard (or less, in this case) to go for a touchdown, Greene has received seven carries. Since 51 percent of carries on first-and-goal from the 1-yard line by a running back from 1999 to 2012 produced a touchdown, our expectation is that Greene would have scored 3.6 touchdowns, since (7 * .51 = 3.57). However, in reality, Greene has only scored one touchdown, so on that down and distance, he has scored 2.6 touchdowns below an “average back” given those same carries. When you add up all those opportunities in each of the situations in question, Greene’s actually a below-average goal-line back, having scored 11 touchdowns against an expectation of 12.2 scores. Johnson, in all fairness, has also been below-average, with 16 touchdowns on 47 attempts against an expectation of 18 scores.

Who were the best and worst backs in short yardage over that time frame? And what do they tell us about the value of goal-line backs?

Well, that’s not very useful at first glance. Four of the top five backs rate among the best backs of their generation, with elite offensive lines playing in front of them and a massive amount of goal-line carries to boot. Meanwhile, the backs on the bottom of the list were dancers (Foster), played behind a terrible offensive line (Shipp, Forte), or suited up in a zone blocking scheme that often used undersize blockers (James). Taylor’s the only surprise on that side of the list.

T.J. Duckett, though, might be a clue. Duckett was considered to be a failed first-round pick in Atlanta, averaging just 3.9 yards per carry during his seven seasons in the league, but he was a great back near the goal line. He had a uniquely short, stocky body, weighing at 254 pounds despite standing at an even 6 feet. Is that our prototypical goal-line back: a back big enough to pound the hole but short enough to hide behind it? Let’s see.

There’s an easy way to find players like that: by using their Body Mass Index, the health measure that adjusts weight for a human’s height. Duckett’s BMI with his listed height and weight was 34.4, the fourth-highest figure in the league for a back with 30 carries or more inside the 5-yard line. If we look at all the carries for backs1 with a BMI of 33 or more and exclude Duckett, they combined to run for 185 touchdowns across 464 attempts. Given the makeup of their carries, they were expected to score … 186.1 touchdowns. Short-and-squat doesn’t win this race.

In fact, the correlation coefficient between BMI and touchdowns over expectation2 for backs with 30 touches or more is just 0.01; that says the two sets of variables have absolutely nothing to do with another. A bigger BMI doesn’t mean a better goal-line back. The correlations aren’t any more meaningful in comparing height (0.08) or weight (0.09) to our measure of successful goal-line performance.

Let me put that into perspective physically. Splitting the backs up into five equally sized groups (in terms of number of players) by weight and BMI, here’s how they perform in the aforementioned goal-line situations:

From what it looks like, backs who are actually relatively in the middle of the size wars seem to be best near the goal line. That group includes our three legendary backs, though, in Tomlinson, Alexander, and Holmes, who were great in any situation (and had a great offensive line in any situation, too). So, while I think it’s worth noting that there’s not any particular call suggesting that teams should go after notably big or small backs near the goal line, I also don’t think they should be forcing guys to eat up or diet down to fit into that narrow BMI range. History doesn’t tell us that there are any particular characteristics for a great goal-line back beyond, well, being a great running back in other situations and having a very good offensive line to work with.3 That doesn’t seem like it tells us much, but it might have been enough to convince the Titans that they didn’t need to give Shonn Greene all that money to fill a job he hasn’t been particularly good at.

So, that’s a bummer. But you probably want to know who was good in 2012, right? Here’s a list of the five best and five worst backs from 2012 and the numbers on the league’s most frequently used goal-line backs to finish things off.

MOST FREQUENTLY USED BACKS IN 2012