Battle for the Best Song of the Millennium: The Final Four 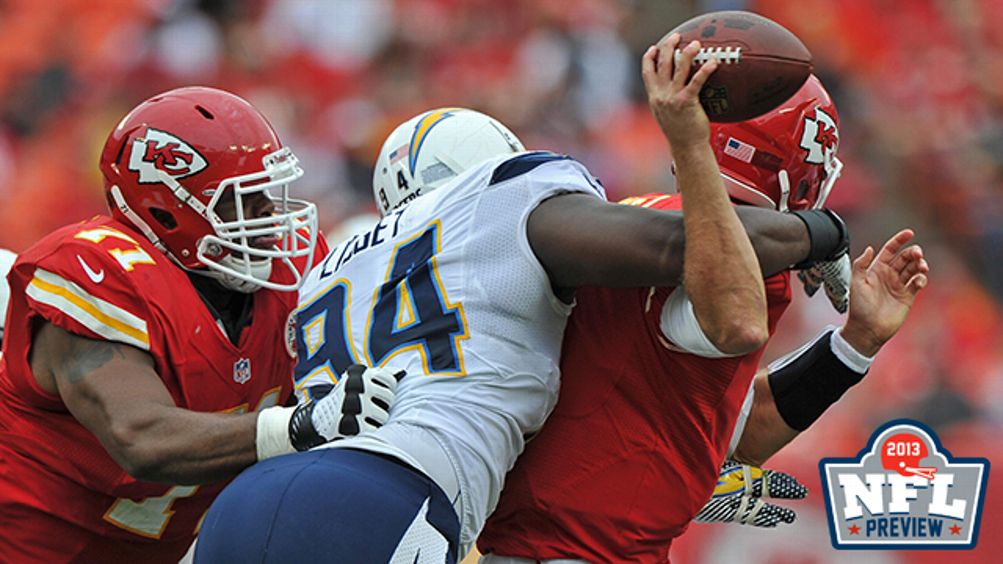 Who was the best defensive player in football last year? You probably just said J.J. Watt’s name, as did I. Who was the second-best defensive player in football last year? That response was probably a little more cacophonous. OK. Who was the best pass rusher in football? Chances are, you said Aldon Smith or Von Miller, who joined Watt as the league’s top three sack producers a year ago. Those three young superstars have two things in common: They’ll be 24 this season and they’re part of what’s shaping up to be the greatest defensive class in modern NFL history, the group from the 2011 NFL draft.

Now, let me be clear: A lot can happen after two seasons. I suspect that Watt, Smith, Miller, and a couple more players from this class will continue to be superstars, but it’s impossible to plot 15-year careers from two pro seasons. What I’m saying here is that no draft class since the merger has been more impressive through its first two seasons than this class has been through the 2011 and 2012 campaigns. And there’s evidence to back up that point.

First, let’s introduce the team. You already know about Watt, Smith, and Miller. For fun, I’ll put together a lineup of the best players from this draft class. I’ll also include each player’s ranking on my Trade Value Chart rankings from last month, since so many of the players made it onto that list:

That would be the best defense in football if you lined it up today; it might merely be a top-10 unit against the run, but it would be one of the best defenses against the pass in league history, with two legitimate Pro Bowl–caliber cornerbacks and three franchise pass rushers patrolling the field on every single third down.

And the scariest thing? I could make a whole other team from the 2011 draft without using any of those players, and that team would be one of the league’s best defenses, too. They would have Ryan Kerrigan (Redskins, 1-16) and Justin Houston (Chiefs, 3-70) rushing the passer after combining for 18.5 sacks last year, with K.J. Wright (Seahawks, 4-99) taking reps on run downs. Bruce Carter (Cowboys, 2-40) would occupy the middle in another excellent linebacking crew. That team would also have a bevy of talented linemen rotating around up front, including Adrian Clayborn (Buccaneers, 1-20, 7.5 sacks as a rookie before missing virtually all of 2012 with an injury), Jabaal Sheard (Browns, 2-37, 15.5 sacks in two seasons), and Cameron Jordan (Saints, 1-24, 8.0 sacks last year), with Marcell Dareus (Bills, 1-3) and Nick Fairley (Lions, 1-13) holding up in a high-upside middle. The secondary would even have a pair of Super Bowl winners in Prince Amukamara (Giants, 1-19) and Jimmy Smith (Ravens, 1-27). The only place it would be weak is at safety.

That’s a lot of good players, right? Every draft produces a few good talents, though, even if they’re not quite at the elite level of the top players from the 2011 draft. There are a few ways to put the truly impressive nature of that 2011 crop into perspective.

Start with the three scintillating pass rushers: Watt, Miller, and Smith. Watt was named AP Defensive Player of the Year last season, making him the first player to win that award during one of his first two seasons in the league since Lawrence Taylor, who won it during each of his first two seasons in the NFL. Taylor’s the only other player to have won that award before his third season in football, and he did that more than 30 years ago. And of course, the only other person to receive a first-place vote last season besides Watt was Miller, his comrade on this 2011 team.

Miller’s and Smith’s respective impacts come into play when you look at their sack totals through two professional seasons. The NFL started compiling official sack data only in 1982, but since then, nobody has accrued more sacks during his first two seasons than Aldon Smith, who has an incredible 33.5 in his first 32 games. Reggie White is second with 31.0 sacks, but then tied for third behind him is Miller, whose 30 sacks during his first two professional campaigns tie him with one of Miller’s idols, Derrick Thomas. After Shawne Merriman, Watt is tied with Jevon Kearse for sixth with 26.0 sacks. That’s unreal: Sacks aren’t everything, but that’s three of the top seven beginnings to pass-rushing careers over the past 30 years, and both Watt and Miller are regarded as excellent run defenders too.

The others are also doing their part. Last year, six different players from the 2011 defensive class made the Pro Bowl during their second seasons: Miller, Smith, Watt, Kerrigan, Houston, and Peterson. That’s a larger class of defensive Pro Bowlers than any other draft class’s second season since the merger.1 Miller and Peterson each made it during their rookie campaigns in 2011; so, in all, that’s eight instances of a defensive player from this class making it to the Pro Bowl before the curtain fell upon his second season in the league.

The last time that happened, it worked out pretty well for the people involved. That was in 1981-82, when three players made it during each of their first two seasons and two more showed up for the second year. That group included two Hall of Famers (Lawrence Taylor and Ronnie Lott) and a player who won Defensive Player of the Year by his fourth season in the league, Seahawks safety Kenny Easley. Everson Walls and Roynell Young filled out the group, but that was the last time there was a talent pool similar to what we see here from this class. And that group of Pro Bowlers didn’t even include Sherman or Wilkerson, each of whom had very strong cases for consideration.

If you think there’s some modern inflation going on with Pro Bowl rosters, let’s instead consider the first-team All-Pro rosters. Three different organizations pick All-Pro teams, but there’s some overlap: eight defensive players were named first-team All-Pros on each of those three teams. And of those eight players, four were from the 2011 draft: Watt, Smith, Sherman, and Miller. That has never happened before. Only four second-year players had made it to a first-team All-Pro squad in the previous six years, and there was just one instance of even three second-year guys making it to an All-Pro team, in 2001. It’s impossible to judge something as arbitrary as defensive play across eras, but this is certainly the most decorated set of sophomores since the merger.

Finally, what’s the target for this class? It has to be the aforementioned crop from the 1981 draft, which eventually yielded five Hall of Famers: Howie Long, Ronnie Lott, Rickey Jackson, Mike Singletary, and Lawrence Taylor. No other draft class since the merger produced more than three defensive Hall of Famers. Again, it’s impossible to put Watt & Co. into those players’ company, merely because the latter group actually went out and played at an extremely high level for a decade-plus. There’s no guarantees the 2011 crew will get there. So far, though, they look awful good.