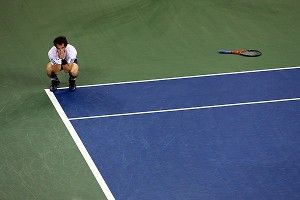 I‘m writing this 11 minutes after Andy Murray beat Novak Djokovic to win the U.S. Open, so forgive me if I’m still a little shell-shocked. That was … well, let’s just say that the American TV audience had two major sporting events to choose from last night. One was a violent, fast-paced assault on the limits of the human body. The other was Monday Night Football.

This was a major tournament final that opened with whipping winds, misplaced shots, rapid service breaks, and a record-setting 22-point tiebreak that took almost half an hour to play. When the match finished, four hours and 54 minutes later, it was tied with Mats Wilander’s 1988 win over Ivan Lendl as the longest final in U.S. Open history. So many rackets had been smashed, nervous loved ones cut to,1 curse words roared into overly aggressive cameras, drop shots plinked across the net, and incredible 30-plus-stroke rallies sustained that the most salient fact of the first two sets — the wind, which wreaked havoc on both players’ games at the start of the match — just kind of stopped seeming to matter. I have no idea if it died down or kept blowing. The announcers stopped talking about it, and the players quit seeming to notice it. I’d like to think that after seriously disrupting the semifinals, it finally realized there were bigger forces at work and got out of everybody’s way.

The end of the final also, of course, saw Murray win his first Grand Slam tournament, 7-6(10), 7-5, 2-6, 3-6, 6-2. If you watched the match, or followed Murray through the tournament, or tuned in for essentially any single nanosecond of his career since he left his home in Scotland as a teenager to train in Barcelona, you are undoubtedly aware that, before Monday night, no British man had won a major singles title since Fred Perry in 1936, and that a certain amount of pressure accrued to highly ranked British players as a result of this decades-long drought. No big deal, really, just the guarantee that it would be the first thing anyone thought about when they looked at you, always, your entire life, and that if you didn’t win one, the fact that you didn’t would definitely go at the top of your obituary. So just obituary-level pressure. Nothing you’d really need to worry about.

I always need small-bore, accessible metaphors in order to understand anything, so I think about crushing sports pressure of the British-tennis-hope variety as being like: walking around in a towel. You can try to act like there’s nothing unusual going on, you can keep a straight face and speak in level sentences, but everywhere you go, people are gaping at you and going: What the hell is wrong with Towel Dude? You are at the supermarket in a towel. You are getting strange looks on the sidewalk. All you want to do is put on normal clothes, but for some reason, every time you try to get dressed, you wind up back in the towel. Eventually this stops being even a little bit funny and turns into a kind of waking nightmare. Andy Murray said at Wimbledon that his advisers and training team keep him totally cut off from outside coverage of his career to minimize the effect of the pressure, but he’s still constantly aware of it because, in effect, the ambient sense of expectation is so massive that it obliterates any circle of privacy he can construct around himself. Because, I forgot: You’re not just in a towel; a dedicated wing of the media is also trying to ensure that as many people as possible see you wearing it, think about you wearing it, and have opinions about it, day in and day out.

Murray is as laconic a player as there is in tennis, and he didn’t react with a lot of obvious joy when he won the match Monday night. He actually apologized to the media afterward for not letting his inner happiness show.2 But if you saw him after losing the Wimbledon final to Roger Federer — that heartrending “I’m getting closer,” spoken through tears — then you have an inkling of the kind of weight this tough victory helped him shrug off. Now he just needs to win Wimbledon and he’ll almost be able to sleep.

Men’s tennis has been ridiculously, I mean ridiculously, good this year, I mean even by its own recent standards. There was that terrific Federer–Rafael Nadal semifinal at the Australian Open, followed by an even more terrific Djokovic-Murray semi that played out like a preview of this match — only with the opposite winner, 6-3, 3-6, 6-7(4-7), 6-1, 7-5. There was the somehow even more terrific Australian Open final, Djokovic over Nadal in five hours and 53 minutes, 5-7, 6-4, 6-2, 6-7(7-5), 7-5. There was Nadal’s revenge at the French Open in a four-set war against Djokovic, this one spread out over two days by rain. There was Federer’s frankly pretty magical run to the no. 1 ranking, his 17th major title, and his seventh Wimbledon championship at the All England Club. There was Murray’s then-impossible-seeming upset of Federer in the gold-medal match at the London Olympics. And then there was Monday night.

What jumps out about this list is that four different men each won one of the four Grand Slam tournaments, the first time that’s happened since 2003, back when it used to happen all the time. Since the four Slam winners also happened to be the top four players in the game, every big event this year seemed to reconfigure the order at the top of men’s tennis. Djokovic’s win in Australia confirmed his dominant position after his unearthly 2011 (70-6, three majors). Nadal’s win at the French countered that narrative, but only up to a point, the French being played on clay and therefore weird. Federer’s win over Djokovic at Wimbledon, followed by Murray’s at the Olympics, seemed to definitively dethrone Djokovic and reestablish Federer at the top of the game, with Murray just behind. And then Murray’s U.S. Open win, combined with Federer’s early loss, upended everything again.

The line that will be repeated by tennis commentators today is that Murray’s win proves the Big Four is a real phenomenon — that Murray can legitimately compete with Djokovic, Federer, and Nadal at the top of the men’s game. And that’s true, as far as it goes. But it seems to me that the Grand Slam season of 2012 has ended with tennis in as uncertain a state as we’ve seen it in quite a long time. That’s not to say it’s wide-open, but consider: Federer has looked shaky since his Olympics final and lost to Tomas Berdych in the quarters at Flushing Meadows. Djokovic hasn’t sustained the near-invincibility he enjoyed last year and has mostly spent 2012 looked indomitable and fighting hard while losing in late-round matches. Nadal went out to the 100th-ranked player in the world in the second round at Wimbledon and has been out of sight nursing injuries ever since.3 Berdych and David Ferrer both won semifinal sets, and looked threatening, against the eventual U.S. Open finalists. It’s not as though parity is breaking out wherever you look, but after a years-long spell during which tennis has been comprehensively dominated by the same few all-time greats, it suddenly doesn’t seem crazy to imagine other players (although who knows which other players) breaking through.

Mostly, of course, that’s because Murray just broke through, holding on in the fifth set against a relentless Djokovic in one of the most grueling matches the U.S. Open has ever seen. Whatever happens in the months ahead, he’ll be a major part of it. For now, though, he can finally say that he’s stopped getting closer. He’s there.