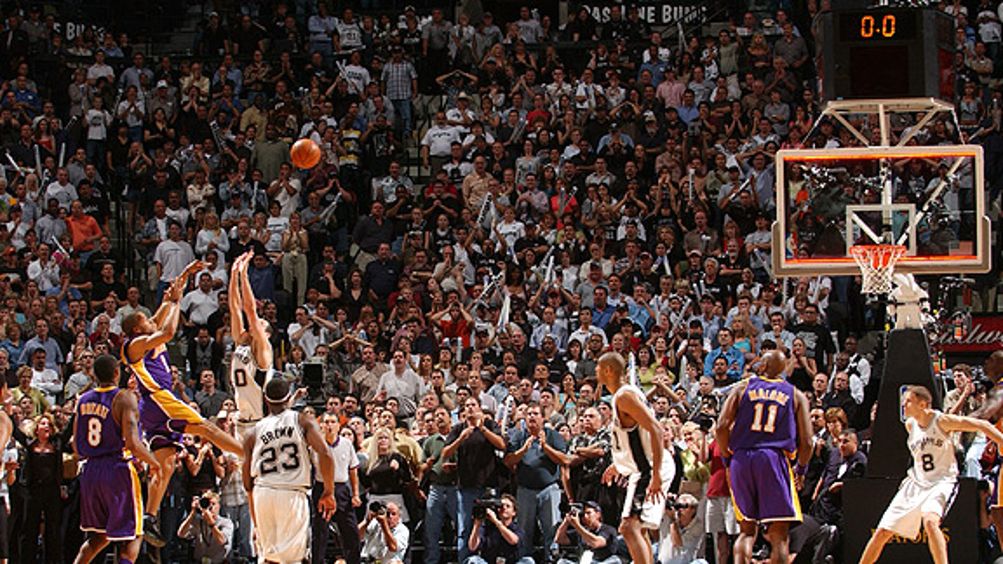 It’s easy to compliment any piece of art, even if you don’t understand what that art is. In fact, sometimes being confused makes the process easier: All you need to do is insist that whatever it’s (actually) about is (actually) not what it is.

Who can disagree? Metaphors are abstractions, and abstractions can’t be judged. In the trenchant words of Ron Swanson, “This is art. Anything can be anything.” And there’s no universe where that philosophy is more often applied (and blindly abused) than in the analysis of sports journalism, particularly when the journalism under analysis is supposed to be deep. Is this man writing about baseball? No. He is writing about the experience of growing old. Is this person interviewing a golfer? No. He is examining the failed manifestation of perfection. Is this a story about a coach who helped his player through the death of a parent? No. This is a story about how personal tragedy transcends race and class. We have all become conditioned to assume that sports are important not for what they are, but for what they signify about the larger world; as a consequence, stories about sports that don’t have a cultural subtext are discounted as wonky and insular. They can be interesting, but they can’t be important (because sports are just games, and games can’t matter).

I bring this up because — right now — I really, really want something to be a metaphor. And it’s just not working. It totally seems like a symbol for something darker and more insidious, but I suspect it represents absolutely nothing. Which I’d like to claim is its own kind of metaphor, but even that seems forced/faked/predictable.

Let me begin: I’m obsessed with a specific rule in the NBA. I’m obsessed with the fact that — following a timeout, late in any game — teams can automatically move the ball to half court. Within the grand scheme of professional basketball, it’s a relatively minor rule. But it’s also the craziest rule in American sport. There’s nothing else like it — it’s the only statute that suggests time and space don’t matter. A team calls a timeout 94 feet from the basket, and it suddenly gets the ball 47 feet from the goal. It would be like the rules committee in baseball deciding that any runner on first base can automatically advance to second if there are two outs in the ninth inning, or like if the NFL decreed that touchbacks inside the two-minute warning instantly moved the pigskin to the 50. So many of our collective memories about classic NBA games exist only because of this bizarre rule: Michael Jordan does not hit “The Shot” against Cleveland if the Bulls can’t move the ball to half court, because there’s no way MJ covers that much real estate in 3.2 seconds. Derek Fisher killed the Spurs in Game 5 of the 2004 West semifinals with a turnaround jumper with .4 on the clock — but if the rock remains under the far basket, the Lakers lose (and the Spurs probably end up in the Finals). In the 1986 playoffs, the Lakers lost to the Rockets because Ralph Sampson hit a 16-foot turnaround with one second remaining, a shot that would have been virtually impossible to attempt had the incoming pass needed to travel the full length of the court. All of these events were possible because of this one irrational rule.

And it seems like that has to mean something.

I mean, this is an incredible rule — it’s never made any game worse. I wish the college game would adopt it next season (I’d even like to see it employed at the high school level). But there’s no denying that this directive is completely absurd. One could argue that all sports rules are arbitrary, but this one actively breaks the accepted limitations1 of the game itself; its employment has nothing to do with anything that happens in reality. Time stops, and the ball just moves itself. It is the near-literal manifestation of the sports-based political platitude “moving the goal posts” (which, we are always told, is improper and should never be done).

So what do we make of this? If an irrational rule makes the game better, does that justify its irrationality? The motive for this rule is obvious (to increase excitement), but I’ve always wondered if the origin of this legislation initially faced friction from traditionalists (since it’s so outside the formal tenets of the game). My uneducated assumption was that this rule must have been put in place post-ABA, since it somehow feels akin to the 3-point shot (which was added before the 1979-80 season). It turns out that solving this mystery was remarkably difficult: Through various channels within the NBA, I received word from 76ers head coach Doug Collins that it was added to the rulebook prior to the 1976-77 season, in response to the famous triple-OT championship game2 between Boston and Phoenix from the summer before. However, Collins’ memory proved false: As it turns out, it was already on the books in 19673 (and — weirdly — the NBA doesn’t appear to have any rule books that go back more than 44 years). What this suggests is that it was most likely always the rule, or at least since basketball entered its modern age. In other words, this was not done in response to a lack of excitement — it was simply seen as an easy way to give a disadvantaged team a glimmer of hope. It wasn’t an attempt to fix a problem. It was just something that somebody made up.

Now — of course — I could just fabricate a social corollary for this and pretend it’s real. I could simply write, “The ability to move the ball to half court after a timeout is a little like affirmative action,”4 and it would be 50 percent entertaining and 12 percent true. But this situation feels different to me; it seems like something that fundamentally breaks the relationship between sports and life. There are many irrational things about sports (and about living) that feel good,5 but not many that are both irrational and straight-up “good” (without any need for qualification). If Barack Obama held a press conference and said, “I want to introduce an irrational foreign policy, but it will ultimately benefit everyone involved,” it would not instill a great deal of confidence among his constituency. The man who insists his insane, unreal rule is an improvement from the status quo is the same kind of man who ends up as the dictator of Haiti, or as the father of Michael Jackson, or as NCAA president Mark Emmert. It translates into nothing, or at least nothing positive.

Yet — in this one case — there is no downside. The dumbest rule in the NBA is the best rule it has. And I don’t think that’s a metaphor for anything.

Sometimes sports are like life, and that makes everyone happy. It validates the amount of time we spend thinking about leather spheres falling through metal hoops, because we get to learn things about ourselves we were already supposed to know. But sometimes sports are not like life. Sometimes they’re just way, way weirder.