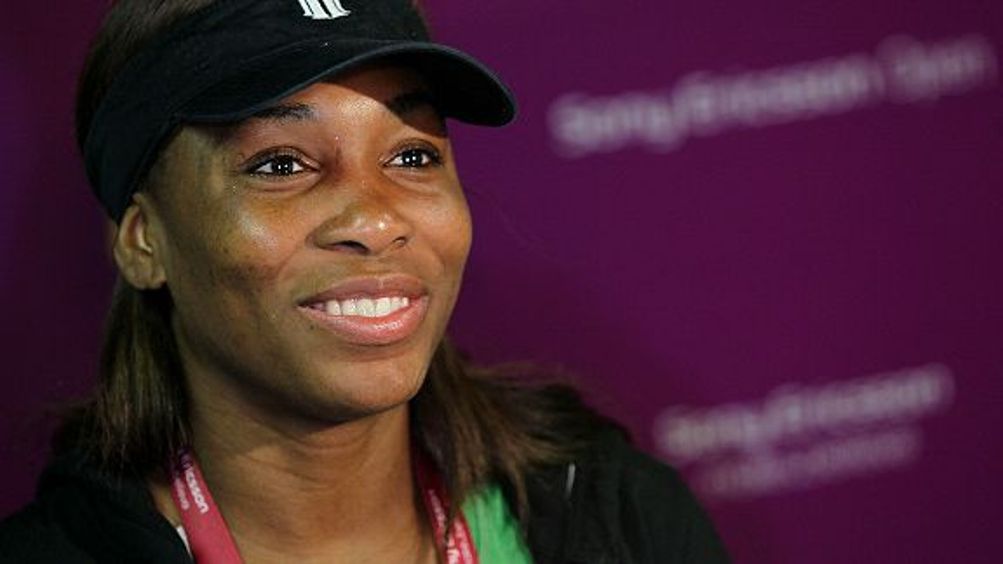 Venus Williams has disappeared before. She disappeared almost before she arrived. Everyone was waiting: promoters, agents, tennis fans. Reebok. Don King! The United States Tennis Association. Two months before her 10th birthday, the New York Times described her in the following way: “Status: Undefeated. Future: Rosy. Age: 10.” Nine months later, the newspaper put her on the front page. Then she was gone — yanked from junior tennis by her father, who had taught her, famously, in Compton, Calif., and who would do things, also famously, his way. She didn’t compete in public for three years. Still, it was no secret that she was coming. “I think I can change the game,” Venus told Sports Illustrated after her first pro tournament, in 1994 (age: 14). Hubris, maybe, boastful, yes, but also a fact.

Venus and her sister Serena played a faster, harder, more athletic game, and they forced their opponents to hit harder, serve faster, become stronger. There are other players who came before them who were bigger than their sport, who dominated it more consistently, and there were others during their time who hit the ball hard. Only briefly was Venus the best. But the Williams sisters have defined women’s tennis for the past 15 years.

They performed this task strangely — Venus especially. She has always seemed to have an ambivalent relationship to tennis. She is the most recognizable exponent of the game (even more than Serena, perhaps, because she came first) and also a vanishing act, an ambassador and outsider at once. She wanted to be the best, but it wasn’t always clear that she wanted to play at all. Richard Williams said he wanted his daughters to be extraordinary, to stand apart. They do. But that doesn’t quite capture Venus. Nothing does. She is elusive.

The challenge, Venus made clear early on, was to change the game without letting it change her. She has always held something back. Her story isn’t one about a rise and fall, glory and fade. She has become a kind of ghost.

This isn’t because she has other interests outside of tennis, which is often the knock. The spookiest thing about her is that she is one of the greatest competitors in the women’s game, but also one of the most indifferent. She’s a winner who somehow doesn’t need to win. So — and this is the question that has always bugged me, and the question I’ll be thinking about as I watch her in this tournament, and write about it here — why does she continue to play?

For a while, Richard Williams liked to say that he was always telling his daughter to quit. But, humblebrag or not, Richard Williams said a lot of things. He couldn’t have been happy with the way Venus began her professional tennis career. Despite a promising first tournament in which she took a set off Arantxa Sanchez-Vicario, the no. 2 player in the world, and despite netting a $12 million contract from Reebok, Venus started 10-9, didn’t reach a single final, and bombed at the French Open and Wimbledon. It seemed like she might flame out.

Some people were only too happy to think she might go. She was proud. Didn’t say hi. Didn’t smile. Kept herself apart. She served like a guy and stared down her opponents. Her father was outrageous and offensive. She was an African American playing on courts that still had signs saying “Whites required” — and you could be forgiven for not knowing they referred to clothes.

Venus had the nerve to think she might change the game — and other players raised an eyebrow. The hype was a problem, in light of her inconsistent results. Her trash-talking another. And then there was the color of her skin. During a changeover at the 1997 U.S. Open Irina Spirlea intentionally knocked into her. “She thinks she’s the fucking Venus Williams,” Spirlea said. Press conferences were so racially charged that Venus begged the questions to stop. And there were a lot of press conferences, because the 66th-ranked Venus made the final, the first unseeded player to do so in the Open era. “I’m tall. I’m black. Everything’s different about me,” she said at the time. “Just face the facts.”

A lot of people (including me) tend to talk about Venus and Serena as if they were one person. The Williamsisters. This was part of the plan. The idea was that Venus and Serena would constantly duke it out for no. 1, and it wouldn’t even really matter who won (though their parents suggested putting the money on Serena) since a Williams sister is a Williams sister. And this caused a lot of snorting, but for a little while it seemed basically true.

For a while Venus won their head-to-head matches, though never with joy. And then Serena won, though not with joy. Serena won the first major of the two, with Venus on hand to watch. She wore black and a stone face. Observers suggested the sibling rivalry had taken its toll (how could it not?). Only then Venus started winning. Until she started losing. And then started winning again. She has won seven Grand Slam titles. Her sister has won 13.

There were many injuries, illnesses. Breaks for design school, fashion lines. The murder of her half-sister, Yetunde. Breaks just because. She would withdraw, and then she’d be back. At Wimbledon, even her critics would admit that she rose to the occasion. She’s won the aptly named Venus Rosewater dish five times (2000, 2001, 2005, 2007, 2008). If the U.S. Open is, for many Americans, synonymous with tennis, then Wimbledon is tennis’ legend — and so Venus became a legend, all the more so because she was like a mythic annual flower, blooming for a moment before retreating into the ground.

This cycle, this “saga” of her life, as Venus once put it, would continue. When she was gone, people questioned her dedication; when she won again, the press jumped for joy. They printed statements of her renewed passion for tennis with a kind of hopefulness, as if to suggest, when she puts tennis first — when she just lets herself love the game — everything is all right.

After her first win at Wimbledon — followed by victories at the U.S. Open and the Olympics — Sports Illustrated put her on the cover as their Sportswoman of the Year. Once scorned and called mean, she was applauded for her maturity and graciousness. How badly people wanted her to love the game, to seem free. “Venus had finally arrived,” Sports Illustrated wrote in its cover story. She defended her title at Wimbledon and then defeated her sister to repeat at the U.S. Open.

Only then she went away.

In 2005, at Wimbledon, she reemerged, winning the tournament as the 14th seed. This cycle, this “saga” of her life, as Venus once put it, would continue. When she was gone, people questioned her dedication; when she won again, the press jumped for joy. They printed statements of her renewed passion for tennis with a kind of hopefulness, as if to suggest, when she puts tennis first — when she just lets herself love the game — everything is all right.

Which is not to say that Venus stays out of the public eye, even when she’s away from the courts. She was busy designing the drapery/toga/romper ensemble she wore at Wimbledon with her clothing line, EleVen. She recently published a book of essays by business leaders, Come to Win. She is now known as a representative for the game and a champion of equal prize money for women. Once brash, she’s the picture of grace, on the court and off.

When Venus is not playing well, or simply not playing, the media will point out her myriad off-court distractions. Or maybe that she doesn’t want it bad enough. And then when she wins, people talk gleefully about how she has found her inner drive, her competitiveness, that this Venus, the one holding up the trophy, is who she is.

When Serena plays, the media uses words like beast. An animal! She beats the ball like a boxer. When she threatened a line judge during the Open two years ago after she called a foot fault on a big point, who was really surprised? Her very gaze is a weapon. Serena never disappears. Even when she exhibits her total disdain for the tour (as she often does) she makes herself a bright target. She has no problem with your thinking she’d rather go to Kim Kardashian’s wedding than play in a nonmajor tournament.

Venus is a little different. She also plays to kill. She grunts something awful, and she moves toward the ball like a train coming on. But it’s a cooler fire, a different intensity. Partly it’s her look. She’s so beautiful, so elegant, her strokes simple, low to high. Part of her appeal is purely physical, a visceral response to her height, her lean muscles, and stunning face, the fluidity of her movements. All those limbs.

Venus is now 31. She hardly plays anymore. She retired from the third round of the Australian Open with a hurt hip. Then there was an abdominal injury. She didn’t return until June. While Serena absolutely dominated the hard-court season, Venus sat out. She was under the weather. She has almost been forgotten. Last year she was no. 2 in the world. At this year’s U.S. Open, she’s unseeded.

Does this mean anything? It’s always hard to say with Venus. Caroline Wozniacki’s no. 1 ranking is basically a computer glitch at this point. The tournament favorite, Serena, is seeded 28th. (And people complain about the BCS rankings!) It does mean, though, that, should she get past the Russian Vesna Dolonts in the first round, she’d probably face Sabine Lisicki, a 21-year-old with an even bigger serve than hers.

But then again, Venus Williams nearly won the tournament last year. She made the semifinals, took the first set off Kim Clijsters, and pushed the second to a tiebreak. She was a handful of points from the final.

This is the shot that finally broke her at last year’s U.S. Open: At four-all in the third set, 30-40, Venus Williams — sounding like death — hit an approach shot deep to Clijsters’ forehand and got an easy forehand volley, but she didn’t do quite enough with it. Clijsters flicked a running backhand lob hard and high into the wind. Venus did her sprinter’s crouch and started moving backward. She would go for it. Most players would only dream of reaching it. And then she was sliding back, her long arm extended. It was the perfect lob. It landed just past the span of her wings. Still, she leaped a little for the ball, and it was like she was dancing. There was so much desire — despite everything — in that gesture, and so much grace.

Clijsters was the one who hit that brilliant shot, but my eyes were on Venus. I don’t know why she plays. But I know why I watch.

An earlier version of this story stated the year of the incident between Venus Williams and Irina Spirlea as 2007.